Been having a good think lately about just using Betfair only for the challenge and I've come to the decision that its not a good idea. I've got a good bit over €1,000 now and going well so I think its time to move on to using every bookmaker possible to reach the €100,000.

The site has gone down for international users a couple of times this week and I need something to fall back on when that happens, I also like a bet on Irish racing with the early morning bookie prices and just using Betfair for the challenge is cutting that off. Sometimes Betfair dont always have better odds, people seem to take it for granted these days that Betfair are always better, they arent.

Although I can still see 95% of my bets being placed on Betfair, I just need the bookies to fall back on. I'm mostly an in-running player so I wont be betting with the bookies often but when I do I'll post a screen shot and a little preview of why I did the bet before it starts hopefully if I can.

Wasnt able to get near a computer since after five yesterday and when I couldnt get through to Betfair to have a bet over the phone, I opened a new William Hill account (got a new laser card last month) and backed Ireland to beat Wales. Also fancied a horse in Cork today and backed that in William Hill aswell, just gone through all the bookies on oddschecker and opened new accounts for the challenge, and also a new Betdaq account, so I've every angle covered! Hopefully it all goes well anyway.

Heres the screen shot from the weekend. 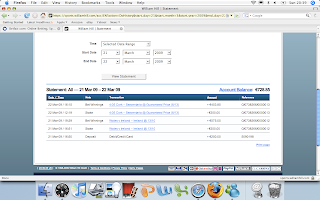