Quiet enough day here without any drama, although I'm still nackered. Had to take an hour break after Heart Shaped ran in the 1000G. Just gutted she finished 4th, more so because she had her head all over the place and was messing Johnny about for the first 2F and he had her back further than planned because of that, not his fault though. To finish in front of the favourite, making up a bit of ground and still not to be placed was heartbreaking. Left a few lays in the system all at under evens so just lost €100 in the place market, I did have €400 on. Had a nice touch on the Ballydoyle horse in the first at Gowran so it wasnt a terrible day.

The cricket went well today again, to be honest I cant really remember what I did in the first match it seems so long ago, I'm fairly sure I caught an early flip flop and went €140 all green pretty quickly. In the second match, I had a brilliant position after the first innings but Bangalore came out and start hitting fours everywhere, I had to reverse to €30 all green after having the chance to go €150 all green at the break, lost interest in the game after that as someone came over. Only had one cricket bet with the bookies and the screen shot is below.

The tennis bet was Nadal to win in Rome, I backed him before the start of the tournament, without having watched one of the matches all week its nice to win. Have another week of exams next week, I'm not looking forward to it at all but even so this week as gone well having them and hopefully next week will go well too. Anyway, its sunday so the Betfair screen shot for this week is below, time to relax for the evening its badly needed! 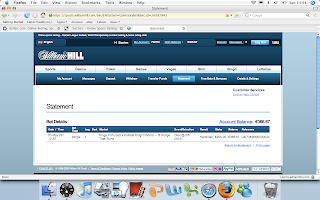 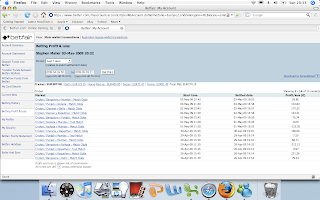