Amazing weather at the moment and if youre in the area theres no reason not to come along! It hasnt rained for a while and with the sun beating down each day, were not used to this in Ireland and were all going around with tomato heads, no craic being burned, a little wind so you dont even notice how badly burned you are! The track has to be near enough to firm, it'll be very quick and nothing in the ground for the soft ground lovers.

3-10 Naas.
Tight little race. Its the 7th run of the season for Three Rocks already! His form is starting to tail off bit by bit, but I'd forgive him for the last day over 6F on heavy ground. Thats no good for him at all, if he was a greyhound he'd never win a race because of the way he traps. Having had so many runs in such a short space of time I'd be looking for something to take him on with, but its pretty difficult to find one. Leandros is a bit hit and miss, he didnt enjoy himself the last day in England but he'll enjoy himself more today, and has a long uphill finish to get going, as does Three Rocks though. Empirical Power is well in at the weights with Three Rocks from their run in Leopardstown, and he loves this trip. If he bounces off in front he might just be the one today, but its a very hard race. Empirical Power for me is the lost likely winner for me, and will back it there. Bit of money might come for Johnnys horse now the stablemate is a non runner.

3-40 Naas.
I'm surprised more English trainers havent noticed weve no sprinters over here. Plenty of horses in England finishing 7th and 8th in their big sprints would clean up over here, Dandy Nicholls seems to be the only one coming over each week and he should collect here with Inxile if the horse handles the quick ground. Looking through the Irish ones its hard to make a case of them. The Oxx horse hasnt ran for so long, although he could be anything and it would be interesting if they started backing it (Oxxes gambles go down too often though) and the Weld horse is a 7F horse running over 5F, I know its a stiff track but still! If Inxile runs his normal race he should win without fuss really.

4-10 Naas.
For me, Beethoven is a certainty. I know theres no such thing but he'll be very, very, very hard to beat. He has everything going for him today. Massive question marks about the form of Love Lockdowns win the last day in Leopardstown, it was a two horse race between him and another Ballydoyle two year old (who isnt anywhere here the top of the pecking order). There was still a lot of confidence behind the Ballydoyle horse but he never got into the race and Love Lockdown looked very impressive, thing was it was a race full of trees! Beethoven ran well in York over this trip, and is bound to come on for the first run which is always the case with AP's. And Diva Dolce would have to improve a lot of her first run. I respect Love Lockdown and he'll put up a very good fight of it but I'd be really disappointed if Beethoven didnt win, and would nearly go as far to say that if he didnt win today he'd never win a race. Hes smart at home and does all the right things, I think he'll win and confident of it. Fingers burnt in Naas if he doesnt!

4-40 Naas.
Tough to call between the front two in the market, Lillie Langtry and Kitty Kiernan. I'm pretty sure one of those two will win, but which one is a much harder question, they both had their first run in the same race here over this trip a few weeks ago. The Bolger camp really liked Kitty and she went off a very well backed favourite, supported all day too. She won well and you'd be sure of her upholding the form if it wasnt for the way Lillie raced, completely different from the winner. She was held up and only really got going towards the end, the way the race worked out and the ground that day would make you think the form will be reversed and Lillie will win. It really is a case of how you see that first race between them. I was in the Lillie camp but shes favourite now, a bit silly if you ask me. I know the Bolger camp like Kitty a lot, its just going to be a case of who gets the run of the race today, at 3/1 I'd back Kitty but the theres more reasons to back Lillie than not. It'll be close, their probably our best two year old fillies along with Wrong Answer, who could beat them both but I wouldnt be backing her on this ground.

As for the rest of the card, good luck if youre betting in the handicaps! I'll be having ice cream while those races are on. Fantastic card, fantastic weather, bank holiday, what more could you ask for, COME RACING!

Note for the derby and all the Ballydoyle horses are working really well, still no choice from Johnny, it'll be close. Tuesday and Saturday (sometimes changes to Friday) are the big days of fast work down there and I reckon he'll know which one hes riding on Tuesday. Theyre all going very well so wouldnt be fussed over jockey bookings regardless of who youre on. All very well in themselves, this was Tuesday.. 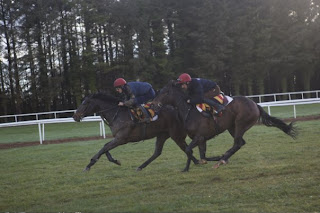 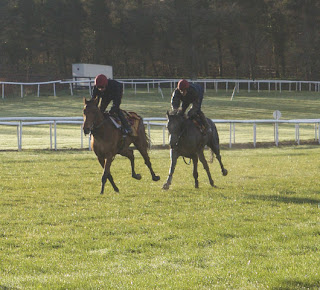