Back In The Game..

Back to looking after myself and my position in the markets and no muggish positions taking chances in hope. I know gambling is 100% taking chances, but theres a shrewdness about it rather than a betting-in-hope-ness about it.

Like yesterday, when I backed Somerset I was hoping for a good start - didnt get it. When I backed England I was hoping for a goal and a good performance - didnt get it. Instead of just managing a position without hoping for something that might not come, can then have a read on things, obviously gonna be wrong loads of times but, you know, sitting on hands hoping for something rather than doing something about it, that sort of thing. I learned a lot yesterday though, it was shite discipline and will not (!) happen again, impossible to be 100% disciplined the whole time, just about sticking to my areas and not drifting off.

Another thing is too, obviously I bet everyday, but sometimes my betting style doesnt suit whats on, the market or whats happening. Fair enough then - I shouldnt bet. That is hard though, at times. That shouldnt even be an excuse though because the discipline and sticking to your markets should be just inbuilt into your gambling. To sum it up into one sentence, I was a mug yesterday. That does it nicely!

Anyway, today was good back to basics, the Dublin market was unreal in the last ten minutes, I was in the panic group too.. my book was Dublin €122, Wexford and the draw zero, so I was panicking trying to square up like everyone else.

Someone then made a huge mistake in extra time, Dubs had two players sent off, but the GAA have a rule saying they can come back to 15 players in extra time. Only caught €99 of evens though before he copped on, real price was around 1.4ish, laying back 1.1 was throwing away money though in hindsight. You know, I get called a Wayne-Keir for messing about with the GAA markets (after theyve finished even) etc, but betting in running, IMO, is all about catching people when they make mistakes. Thats basically my job, thats the thing to do, nick the wrong price. I'm not gonna ever apologise for doing it. I totally disagree with the "fast picture thieves" idea too, theyre basically doing their job well and better than most, its not their problem people put up wrong prices. Dont like it, dont put up prices, simple (IMO).

Much like the bookies, they can set up whatever overround they want, and if people bet into it, thats their problem. If we could lay it ourselves we would. Morals are low on the exchanges arent they! Put it this way though, you can a be shark or you can be a fish, no one is going to look after you anyway, youre on your own either way.

Anyway the week, pulled it back to levelish today. I'm annoyed the bad stuff cancels out the good stuff but sure it happens and happy to be level instead of losing. Delighted with the horses this week though, really good, profit of €175. About the horses in running - basically I know I'm not the greatest or indeed have the fastest pictures, so if I can eek out just say €20 a day, thats €7,300 a year, and €20 a day might seem like nothing to some, but €7k a year off whats now my 4th sport would be awesome. I dont start with the target of €20 each day though, targets lead to chasing IMO and its impossible to win everyday, so just take it as it comes and hopefully average the €20 a day. Say I meet that, thats €7k off the 4th sport out of four, then add cricket, boxing and GAA - it adds up quickly. Plus it gives cushion if I have bad times on the others.

I was an utter mug on the cricket this week, although I know what I did wrong and it wasnt where I'd normally be. Betting in the first innings is inexcusable, deserved to lose. Shite discipline. The football was worse..! I liked the odds yes, but its just not normally something I'd bet on, or do while betting on the cricket. Betting with no reason, mug betting, guessing, the lot.

Royal Ascot next week, cant wait, probably best three chances of a Coolmore winner for me anyway are Samuel Morse, Starspangledbanner and Age of Aquarius. Epic racing all week though to look forward to.. 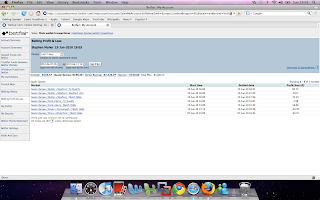