Well, I hope everyone had a nice Christmas, all went well here without a hitch. It must be ten years since I had Boxing/Stephens Day without a bet, it'll probably be another ten years before it happens again (or more hopefully!), but I think I'm in the same boat as many others this year. No racing at all made no real difference to me once Leopardstown was called off, but its been a weird day without it, I'm gutted because I normally see people at Leop that I wouldnt see for the rest of the year, old friends from school and college you know, theyre not there for betting but just for the craic like usual, a shame because its not often I get to combine gambling and friends who arent interested in gambling in the same place.

Anyway, The Ashes is getting the majority through I assume, the darts starts tomorrow. Premier League fixtures have probably been made ages ago but in hindsight it would have made sense to play Arsenal v Chelsea today rather than tomorrow, it would have been great, not that I dont think Fulham v West Ham is "Super Sunday," errr..

As for the week, its pretty blank, Saffers v India settled on Monday and I had a few quid on Leopardstown to be called off looking out the window when the snow came. Next week is sure to be more eventful, it'd be hard to be more boring sure! Aus have returned to being shite, even more shite than I expected to be honest, was against Eng for short times but managed to cop on and get out of that quickly, Eng will have to feck things up for a bit of market movement and unless that happens I think this'll be my final book..

Dont really fancy staying up, but when theres nothing on during the day it makes sense to stay up. WTF were Aus doing though, some of the "shots" were ridiculous.

Some good news though, The Rubberbandits Horse Outside got Irish Christmas number 1, BOOM! I cant be bothered to post on the Irish forum on Betfair anymore because its full of trash these days but reading it there it seems theyre giving them a hard time. Everything on the forum is always generally negative anyway, but I think shouting "fuck your Honda Civic I've a horse outside" when drunk is funny. As does the country when its Christmas number 1 I suppose, Irish forum is best ignored - the cricket, boxing and darts are quite good though. Well done to them anyway sure its a laugh and what the country needs because every time you stick on the news or read a paper you'd want to kill yourself with the doom and gloom. 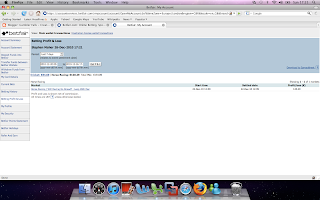