Missed the horses today due to being at the course and never had a bet before I left as didnt fancy anything too much. Got home and played poorly, didnt really do much right and the golf was just a disaster from the start, backing Tiger and Harrington, when they had gone that left me -300 the field but got it to -190 by the end of saturdays play and should have left it at that. Got involved again tonight and ended up losing an extra 100 from were I said I'd take the loss, and thats the annoying thing. Where do you start looking at a all red screen? Its very hard, and I should have just forgot about it and left it at -190. Got back from Navan in time for the cricket and again didnt play it too well, still finished in profit but I fancied West Indies and I traded the game poorly thinking back. On a brighter note Amir Khan did the business so that puts me €1 up over the Boxing, Cricket and Golf bets so it could have been worse!

Anyway bar the golf its been a fantastic week on the blog and for me personally over in Cheltenham, regardless of how much I won it was the best week of my life by far. Have a screen shot here of the week, it includes last sundays winnings, and they were in the last screen shot aswell but its betfair really and I cant change it, it will probably happen every sunday, whats more annoying is the golf will come on next weeks aswell! In the main, delighted to be over €1,250 after just two weeks. 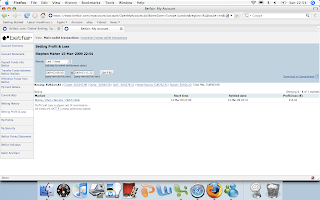