Wont waffle on too much as theres someone here, an OK day, nothing major. Backed England after the first two wickets fell hoping for a trade which never came so went €100 all red. They were woeful. Got €50 back off the Saffers match and played the horses for one race. Had a good bet on the boxing after seeing the build up on sky, which turned a losing day into a winning one. Lost on Betfair, won with the bookies. 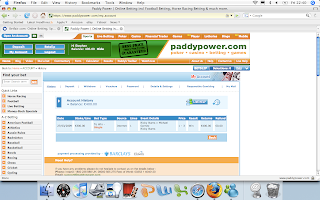 Also backed Tiger this weekend in the golf, happy enough with his position and hopefully he can get into the last round in the same group as O'Hair. We'll see what O'Hairs bottle is like but I wouldnt want Tiger playing catch up too much on the last day.
Posted by Stephen Maher at 3/27/2009 10:41:00 PM