Wont say much as theres someone here, battled well to get back the earlier losses on the horses but still finished behind and I'm not playing too well in running of late. Its hard with the flat starting and the jumping not quite finished yet, you've got a race from Cheltanham and then five minutes later a race from Newmarket and I was just making silly mistakes. Played the darts well for the first time in a few weeks, didnt get to play the last two matches though. Tomorrow sees the first evening meetings kick off and hopefully it'll be a fantastic summer. 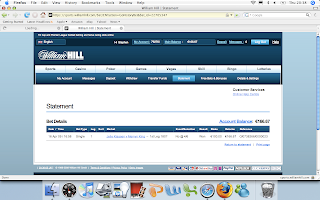