Well, did lots of things wrong today but finished nicely in profit at the end of it. Saved all red positions in both IPL matches, and ended up winning a good bit in the second game. How the hell were a team 1.5 to chase 140 under lights at Newlands, theyve had four games there so far, three wins for the team batting first and a tie with Chris Gayle in the team chasing that time, took on the market big time at the break and it paid off. Threw away a bit at the end laying Punjab at 1.04 and 1.03, no idea why Rajasthan didnt throw the bat at it near the end, one or two sixes and the market would be flying out again but it wasnt to be.

Got up late today and missed the GP and the early cricket runs markets on bet365, was just thinking I couldnt back them in the second innings because I was laying the team chasing, never thought it might be an idea to back under the handicap, it would have been very profitable today. But when youve got a big position on Betfair its best to just stick to working on that and forget about what the bookies are doing.

This week has been fantastic, really fantastic. I think was just a few euro over €4,000 last friday night and I'm at €7,500 now. Nice to have the cricket everyday and I've been lucky with a few calls on the football, and one or two good tips on the horses. Its not really the time of year to be backing horses, even though punchestown is on next week and I cant wait. Have exams in-between and there'll be a good few days next week where I dont have a bet for the challenge. It wont be a totally blank week, but it might be near to it. Anyway, its sunday so heres the Betfair screen shot for the last week. 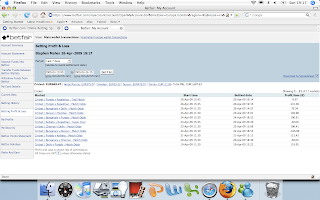