First day of May and wow what a frustrating day. It was one of those days you think youre cursed, laid Punjab at 1.35, I thought it was a fantastic lay at the time but as Vuvraj got going I went all red. He gets out the very next ball and I'm sitting here thinking "FOOK ME," it basically went down hill for Punjab after that and they ended up losing. Just so annoying for it all to happen one ball after going red, I could have been massively green an over later, thats cricket though. Messed up the first game too, that was more me taking on the market though and I blame myself completely for that loss, could have easily went all green but stead in my position for the whole game and it didnt work. A terrible day on Betfair, it could have easily been a €400 profit day with my positions.

The day wasnt all bad though, had a fantastic run of results on William Hill. BUT wow, I tried doing my normal bet lately of unders on the two opening batsmen, I dont really know what happened, but I got a green light for one and a red light for the other as his line had changed. Fair enough I thought they took the other one, well they didnt and he got out the next ball! How annoying! Was really pissed off and thought I'm going after them now and I started betting in €300's during the first innings. Luckily enough the bets I did won but I wasnt really thinking at the time and it could have gone very wrong, the first line I did was an absolute mug bet, how he got to it I dont know, the two after that were OK as I had the first bet winnings too fall back on if they lost, withdrew the money when the first innings was over after that. I'm delighted I won money off them because I really didnt see why they didnt accept the line that hadnt changed, I dont mind the line changing sure youre betting in running so their allowed not to accept one but there was no reason not to accept the other one. 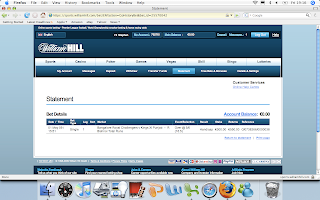 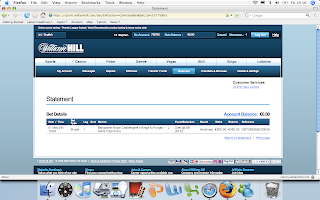 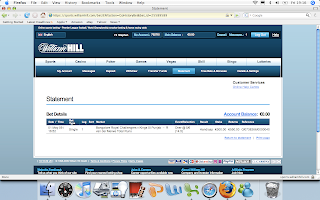