A really, really good day. Even though the Betfair P&L shows a little loss, it was a fantastic result, I was sitting at 3 o'clock looking at a €400 loss again.

Still learning the ropes on test cricket, I'm very short sighted and the five day market is hard to understand fully for me. I like working towards a target or time frame and the five days just seems endless because basically three wickets can fall in ten minutes and then nothing for the next ten hours. I cant cope with that and not understanding the time frame means not understanding the odds, I'm always miles away with my draw price.

I like watching it though and thinking about what I would do without actually doing it and betting on the session runs on Betfair. Bet365 were going over 6.5 runs for the last few batsmen, I thought that was insane? But actually watching it, its not far off what most of them got. And their over runs where around 2.5 per over too, one over of spin was 4/7 under 2.5 runs, I thought that was mad.

Anyway all that aside, wow was I unlucky this morning. Backed 90 runs or more in the first session and England take bad light at 11.30! I laughed. Only England. Then come back out and I need four runs to win with 15 or so minutes to go before lunch, then Jimmy Anderson gets hit on the head and lies on the ground for the next 10 minutes and I end up two runs short, dont even ask because I cant even explain.

What I did learn though is that tail-enders dont hang around long and they dont hit it out of the park either. So I backed under the innings line for the Windies when they got into their tail, they were in full collapse mode too at the time. Thought about backing over the line for their next innings but didnt, I still need a bit more time watching it.

The horses went well today, first time in running for a while and won over €250, I did however lose €250 on Masterofthehorse before I won the €250 in running. The less said about the ride the better, but people talking about it being "cheating" just because the stable second string won are mad. 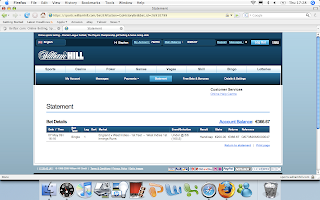