First off, the golf was going really fantastic last night.. until the second tee, then it all went pair shaped. After having €300 on Tiger, I suppose I cant complain about losing €251, just a wrong call. Its been going like that lately.

Anyway on to today, got behind really early after losing on the first horse race I played, pretty annoying because nothings been going right last few days on Betfair and its no good at all when the first thing of the day you do is poor. After laying a horse in running and it basically flew home from near last its no good for confidence at all, you start to think youre jinxed too, its amazing the things that go through your head. Battled well to get back to level and then went onto the cricket, played the game in England well and the IPL game not so well, I fancied Rajasthan from the start and they were pretty bad today. Cant complain about what I did in the market, just didnt pick the winner. Last few days have been going like that and there isnt much I can or say do about it either, just have to play your way through a bad patch of form and hopefully not lose too much.

The cricket runs bets were a bit odd today I have to say, both batsmen I was afraid of got out early and the other two, who are poor to be honest, both got over the line. No complaints but a €50 loss on the day, looking forward to tomorrow though and we'll see how it goes in the two games. 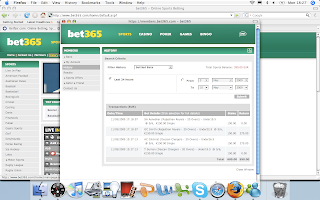