WOW! What a day in the IPL, two amazing matches, best day so far I reckon for close finishes. Sadly, I was on the wrong end of both of them but didnt lose too much thankfully in the end, put all my green on Mumbai needing four of the last over and they lose three wickets and are all out! Then in the first game, basically all my fault, thought Bangalore would win but after a few wickets fell didnt have the bottle to stay in the market and went all red, then they eventually won in the end.

Really gutted I didnt back Black Bear Island in the dante, having known how good he was working, how good he actually is, I even wrote on the blog he was the most eye catching in The Curragh workouts a few weeks ago. Told my all friends Johnny had picked the wrong one and I dont even back it myself at 16/1! Had to watch him win. Really, really fantastic for my Derby bet though on Fame And Glory because hes much better than the two Ballydoyle horses that ran today, and I wouldnt be very sure Black Bear Island would get the trip fully, hes all about speed I think. Colm rode a canny race today though, hopefully he keeps the ride for the big one if he goes.

Anyway, not around tonight off out, but laid Ireland to qualify in the Eurovision, yes I know, I know the Eurovision, no one likes us though. I'll put it in with tomorrows P&L. 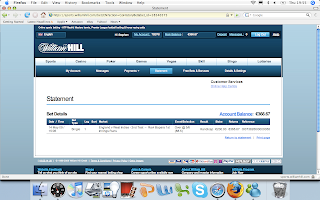