Adam Gilchrist is absolutely amazing, a Rafa Benitez style FACT! 85 off 35 balls with a strike rate of 242.85, dont think I'll ever see an innings like that again and it was a pleasure to watch. Anyway, the game went as planned for me really, with only the first innings total posted being the only thing that went wrong. I've a screen shot below to explain this a bit better, but basically the Delhi openers have been poor since the start of the IPL and it was always the idea to back them after they were out, making sure the 3rd and 4th batsmen were settled, I had average odds of 2.19 for €600 going with the market. It looks like a big bet but I was never going to lose €600 in the market, always have a plan of going all red when things go wrong.

The idea was they would post 170+ and I'd then lay Delhi at odds on and put all my green on Deccan, betting on Gilchrist starting quickly as he always does, getting a flip flop and then going all green, it didnt exactly work out like that though. Had to change quickly after Delhi's innings finished laying €600 at 2.36, then backing Deccan a bit to make my book: -€300 Delhi and €144 Deccan, when getting involved during the first innings and it doesnt go well its best to go all red at the break I think anyway, then give yourself time to think which team is in the best position from that point. The total was miles short today though, but I didnt think Gilly would take the game away like he did, I was just hoping for a chance to green up at the break.

Fancied a few horses in Wexford tonight to place and that went well, think Skorcher will win the last but the price has gone now and the ground is getting worse. I'll be at The Curragh for the Guineas tomorrow and sunday so wont be near a computer for most of the weekend. Mastercraftsman is a certainty though isnt he, 5L on the bridle with Johnny shouting whos the daddy at Jamie when hes going by, I can see it now! (Cue Delegator winning now, I know, I know.) Looking at the rest of the card tomorrow, I like Beach Bunny, Utmost Respect and Air Chief Marshal whos pretty impressive at home. And who will Johnny ride in the Derby - bit of question now its not as clear as the betting suggests. I'm happily on Fame And Glory regardless. 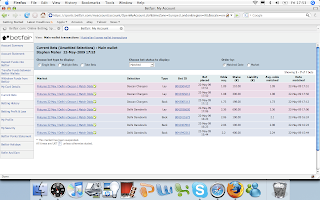