First off, I'd like to apologise to everyone. I said Mastercraftsman would win by 5L and he only won by 4½L, only kidding. Managed to get 5/2 a couple of days ago after he did a good piece of work, he was fantastic today and it was a good day out on The Curragh, hopefully tomorrow will be as good. Rip Van Winkle is burning up the Ballydoyle gallops at the moment but I dont agree with the price, he has always worked well but hes not really won anything has he, and Johnny hasnt decided who to ride yet, sure we'll see, I'm bias because I'm on Fame And Glory.

Made a pretty big mistake when I came home getting involved in the cricket, there was only about half an hour or so left, I should have just watched it. But after such a good day I was still buzzing and I was tempted in, lost a fair amount, really annoying at the time and had to take a little break after it. Made sure there was nothing left to bet on when I came back so I wouldnt chase, I can normally sense when I'm going to start so its best to walk away, its taken a while to get to that stage and a lot of learning. And you dont learn much from winning.

Just watching the end of the Barca game here, their losing 1-0 to the team 3rd from bottom, basically cant go backing the likes of United and Chelsea tomorrow even though their such good prices. Fair enough they'll probably win but its not worth the risk away from home when the games dont mean much, people will say the United second team will beat Hull but I wouldnt really believe that, it takes a lot to win a premiership game - just ask Newcastle! 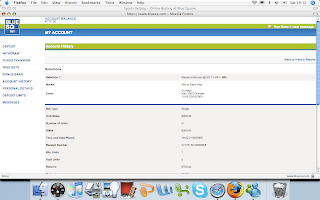