Its a long way to Tipperary. Anyway, the cricket didnt go well this morning, I thought England batting first would help the West Indies to be honest, they were really poor though, they had nothing to blame today but themselves. I was all red when England were about 1.33, I had to go racing then too so there was no way back, but it turned out to be a 1.01 train so I probably would have made things worse anyway. Its a little annoying because I trusted the West Indies to perform, but what can you do, they didnt.

Champions League final tomorrow so wont be around until Thursday, as it comes closer I'm starting to think if backing United is such a good idea, I dont know, I'm about 50/50 now wether to back them or not. If Berba starts I definitely will NOT be backing them! I'll be gutted if they lose without losing money on it too, but I do think they'll win. I'll wait to see the teams. Get the feeling if I'm not 100% about something I shouldnt be betting on it.

Had another winning day with the bookies, really happy to win both bets because it improves the days overall P&L. But I have been thinking more and more about it, it really does affect my betting on Betfair, I'm giving up cricket bets with the bookies after today, the only bets I'll have with them will be early morning prices on the Irish racing. I'm pretty sure the second bet with William Hill was a chase bet because I was all red on Betfair, its not normally the type of bet I would do. Last night I went to bed thinking about how important discipline is, it really makes or breaks you, felt I lost it a bit last night on the darts and its crept in a bit today.

I have to say I've felt in a bit of a comfort zone since getting over the €10,000 mark and with the flat season back a few big important wins on course and the likes, its easy to sit back and relax, its already happened sure, but it doesnt take long giving it back when youre not minding what youre doing. I've done silly things now the last three days. I want to go back to caring more, thinking every bet is important and seriously keep things tight. Really going to focus on discipline from now on, no more messing about just because I've won a few quid. Its almost as if I dont care when I lose €200, its hard to explain, thinking whats €200 in the big picture of things but its bloody important, I have to care more about money. I've never had a job so its very difficult for me to put a value on it. Today I was playing stick cricket while trading on England v West Indies - while having a €500 liability, its not good enough is it.

I've been here before and had this feeling, its why I started the challenge, I really enjoyed when the bank was just at €100 and it was edgey every day struggling to make €20, I like a challenge because it gives me something to think about about. I ask questions of myself and see if I have the answers. The point is, I thought way much more about my bets when the bank was small than I do now, because every bet was important, every bet mattered because if you lost on one market that might be half the bank gone. Now its just not as edgey. Maybe its the addicted gambler side coming out in me! But I've thought long and hard, I'm really going to focus on discipline and not allow myself to relax, its 100% effort every day on Betfair. If I can work at this, it really would improve everything. No more messing about. Yeah I've won money but I can improve, there is always a way to improve. No one is perfect. 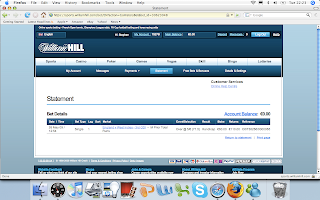 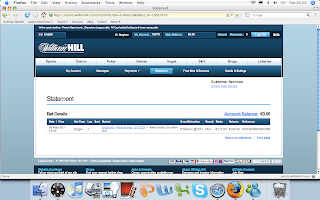