Who would have thought we'd see the day Nadal get beaten at the French open before the final! Would have been a great day if it wasnt for that, but theres not much I can do about him losing, first time hes lost there. If you gave me 1/2 about him winning the French open I'd do it most times. The new rules helped a lot, I did actually have €400 on him last weekend, but laid €170 back the day of the new rules so a loss of €230 but it could of been worse.

The GAA went well again and had a small quick trade on the cricket, should have let the bet run but wasnt watching it, regretted laying it back as soon as I did. Apart from that nothing major today and off to a BBQ instead of the Spanish soccer, Osasuna odds on to beat Real Madrid, worlds gone mad! Going racing tomorrow too so wont be around.

Its been a poor week on Betfair overall. But still above €13,000 thanks to Betdaq and the bookies, not really unhappy with the week as its made me change a few things and they'll definitely help in the long run. As I said, dont mind losing if I learn something and I learned a good bit this week. June will be very different, focusing on discipline and money management, dont lose and the winnings add up quickly! 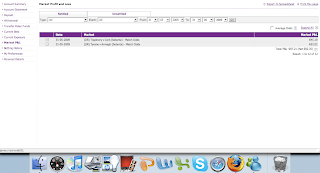 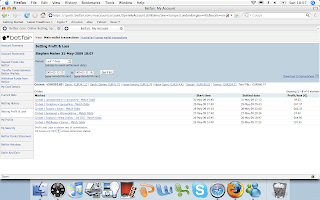