Big news of the day is that Johnny rides Rip Van Winkle in the Derby after a workout this morning, Seamie rides Fame And Glory and I'm delighted he keeps the ride. I would have thought Johnny might ride Fame And Glory, the fact that he was impressed with him the only time he rode him this season, but he likes Rip Van Winkle and fair enough, he'd want to be right now or he'll look a bit silly. I think hes picked the wrong one to be honest, its one thing looking amazing at home and looking amazing when getting beaten, but I'd rather look amazing when winning and thats what Fame And Glory has done. Hes picked the wrong one a good few times, last year he did it quite a bit, it makes things a bit more interesting anyway and cant wait for Saturday, have my flight booked! I dont agree with the price of Fame And Glory going out I have to say and wont be laying off my 7/1, I would LOVE IT Kevin Keegan style if Seamie won!

Anyway, today and yesterday I was let down by my internet and Betdaq. Today was Betdaq, they went offline in the middle of a cricket game, went straight to Betfair and ended up losing more than I won on Betdaq, if I let the bet run too I would have won. Yesterday, I came back from Naas and traded the South Africa game and my internet went kaput - a loss of over €250 because the first time I entered the bet it never came up on the screen but it actually went through to Betfair, so without knowing it I did the bet twice, annoying! When I did eventually sort it out the game was as good as over and all I could do was go all red at 1.1 after finding out what I had actually done, needed a jog to calm down afterwards. I'll lose €8 if England go on and win but I've got to go out for the evening, laid them but backed it back now, will put the €8 loss in with tomorrows P&L. 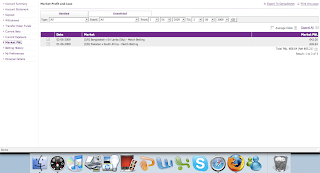