Just watching a few bits of the Real Madrid and Shamrock Rovers match this evening, Rovers were robbed! Didnt watch it all but Real looked pants, I know this was Rovers world cup final basically and Real probably couldnt care less but still, Rovers arent even top of the league of Ireland. You'd expect better from Real and I'm still not convinced they'll win La Liga with all the money spent. 80M for Ronaldo, you know much Rovers paid for their highest transfer? €25,000. Ronaldo spent that alone on hair gel in boots Sunday afternoon on Grafton Street. Even though if Barca buy Ibrahimovic that'll give Real more chance of winning. Bit scary I had €400 typed in at 1.12 thinking its a free €50 nearly, dont know how I didnt hit enter but the thought running through my head at the time was "Ah here Stephen, its July and youre betting on a Shamrock Rovers friendly, what are you doing ya tosser." I hate football betting, would have won alright but 86th minute, would have lost half a stone sweating on it.

The only good thing to come out of the game was the blue Real Madrid training top looked nice, getting it tomorrow, and the red haired girl sitting behind the manager, she was amazing. If I didnt have a girlfriend I'd be out on the streets of Dublin now looking for her, but anyway the dishwasher broke today so its looking odds on I'll have to get married soon enough. I'm not joking dont know what happened, it was working yesterday and now its kaput. Disaster. What type of pro-punter hasnt got a dishwasher. The games opened my eyes to betting on football (for the 100th time) isnt for me, dreading the new season but its made me want to stick to the rolling bet idea with Betdaq, probably start with €20 rather than €50, that way if it goes kaput ten times its only a loss of €200, alright over the whole season I suppose. All my talk about staying away from football though and I still had the bet typed in, bad times.

Been a good day after the test result left me a bit gutted. Still stand by letting all the green run but it did get me thinking I should try and keep my emotions detached from my trading. I get too involved sometimes, was right up for a world record chase and had no thought of going all green, when probably given the game situation I should have got at least maybe €100 out of it. Same when I'm betting on games involving The West Indies, loveable bunch of lazy fookers. My second favourite cricket team is England so happy their ahead in the series, but jesus 2.14 to win it is a joke price for me (not laying it though, not my style), two evenly matched teams, its a case of whoever turns up on the day and 2.14 to win with three games to go is short, very short. The Australians bowling mightnt be great but their batting is good and never fails twice in a game in my view, so its a case of Mitchell Johnson bowling within 10ft of the stumps next time around, it might be quite handy mate! And getting Brett Lee back. Nothing much between the teams, that whats made it so good. Next few grounds are result grounds so its going to be brilliant to watch either way!

Gutted I missed the 2/1 on Amir Khan to beat Ricky Hatton will William Hill today, fight has to happen in 2009 or you get your money back, that was a massive price for me, biggest I've seen in a while. Hope it happens though, Khan will win and will be over evens come fight time, would be a lot of interest and different views on it so hopefully it happens. Hatton seems a bit too stubborn to retire and the khan camp would be confident of beating him, and anyone who thinks Hatton has too much power, I remember the fight at Citys ground (cant remember the blokes name he was fighting) but he didnt have the power to knock him out and he wasnt throwing back much either. Khan on points easily for me. Weird that hes hated so much, I know hes big headed but show me a boxer that isnt, reading all the seething on the Betfair forum on Sunday morning was very funny though.

Messed about a bit on the horses today and it went well, won €30 from laying a horse in each race for about two hours, risky game but was only for a €50 liability each time. I was glad Definitive Edge won the bumper because it worked out I got more if he won, nice to lock in a profit early doors though. I can see the appeal of trading to many, not for me though no buzz in a close finish! If youre good at it, I presume its a gold mine. I just wouldnt be able to sit down all day to stare at the screen and then while the race is on youve no enjoyment of it at all, too much like working in an office for me. Need something to get the nerves going.

This type of thing is never good for the nerves though.. 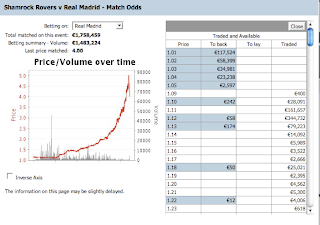