Just a quick update after I posted yesterday evening managed to win a few quid on the cricket and darts, so the P&L for yesterday now reads..

Anyway on to Galway, its a mad meeting, for mad people. Fact! I used to go down every year and bet fairly big, drink for the whole week and come home not remembering much but in the last few years I've started going to Goodwood instead, and it will be the same this year. You can say what you like about Galway, but honestly form means very little! Its all about gut feelings and word of mouth. You can sit and study the form for hours, it wont get you very far, the best advice is just go and enjoy yourself and get locked, and thats normally what everyone bar the jockeys do, except for Thursday night because everyone just gets locked that night! Paul carberry swings from the roof in the hole in the wall pub, a sight to behold, seriously.

Everyone will tell you to follow Weld, and their right. While AP focuses on Goodwood, Weld normally has a free rein in the maidens, but he does bring all his handicappers here on good marks. Stunning View will be backed off the boards in the 6-20, the first real Weld hotpot and everyone will get stuck in whos down there, no reason not to either having finished 2nd in the best maiden run in Ireland this year at The Curragh. It'll take an awful lot to beat him, but at 4/7 - 1/2 thats a tad bit short with Banyan Tree against him, hes no mug and ran an OK race in Naas last week, maybe didnt finish it off as well as he travelled, so he steps back down in trip to 7F. It'll be close but it takes a brave man to go against Weld in Galway, but at 4/7 I cant back him, if I was on course I'd back AP's but the fact I'm not, I'll just watch.

Weld again has the favourite in the 5-10, 8-10 and 8-40. He has the favourite in four out of seven races, think thats too much, well you'll have to get used to it because Galway goes on for seven days. They wont all win though so you have to pick out the false favourites, but Art Broker looks to have a great chance in the 8-10. Three runs and straight into a handicap, as I said DK thinks this is a good mark, otherwise the horse wouldnt run here and he'll go off shorter than the 3/1 now should he have a winner earlier. I'm not going to go into detail on his form but it looks to be strong enough, you just go off form here and you'll lose over the week. But this looks a typical Weld Galway winner, and if he goes off over 3/1 he'll most likely lose too so I'll take a chance and have €50 on him at 3/1. Its the first day of Galway and I want to have a bet more than anything else.

Weld has the bumper favourite owned by JP McManus, could you picture the price if he has a double beforehand. If word goes around Galway that its fancied it will be backed as if defeat is out of the question. While in the main race of the day at 7-00 my two would be Truckers Delight and Zaralabad, even though Mountain Snow is a total outsider the horse loves Galway so dont be surprised if he popped up, you couldnt pick him going by his form anyway but that wouldnt bother me. Ruby will probably have a winner as well, dont ask me what race, but he normally wins something. 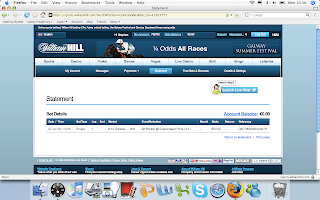