Didnt do too much today after flying back from Goodwood this morning, lumped on Tyrone to beat my beloved Kildare thinking we were going to get a hammering, we didnt, it was close! Thank god I was on the golf course at the time really I'd say I would have been pretty nervous when Kildare were four points up, Alex Ferguson knows the score going out golfing when something important is happening. I had €300 on them with Paddy Power and €100 on Betfair, but a far bigger bet away from the challenge on them too! I'm just thankful I didnt see what was happening, but I always thought Tyrone would win, but four points down I might have been thinking of going all red.

The cricket didnt go well yesterday and I was stuck with a 1.10 train. While I've just backed England in the third test, Australia two down already and I just reckon there'll be a bit of trading in the price tomorrow, if theres not I'll accept that and wont be too gutted. But the mornings have generally gone well for taking wickets for both teams so there might be a bit of panic tomorrow at some stage, I wont be going all red either. I've already said a few times I struggle with the time scale of test cricket and maybe its a bad bet but I think its worth the chance tomorrow, I was all red already so I'm a bit behind the market but England could trade odds on at some point tomorrow. Get an early wicket and get Clarke early (very important!) and I think England will win, but its getting those two wickets in time that might be the problem, and as well England dont have to win for me to win, they just have to make everyone think their gonna win! Ah sure we'll see tomorrow.

Theres not too much I can say about this week, mainly because I havent been on Betfair too much but have kept in touch. Basically every day has been win on one sport and lose the same amount on another sport, a few silly bets and thats to be pretty much expected when youre not putting the resreach and timing into in it like I have this week. But for a week away I cant complain and I'm pretty much happy to be level! 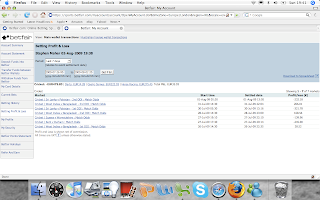 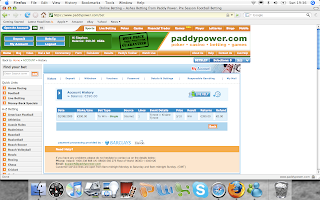