I know I said I'd relax a bit but not that much, its better than losing though! I wasnt actually sitting here betting in €2s all day, I was €20 down at one stage on the horses and when I got back to level gave up. While the cricket was a bit annoying, traded it very well but always had all my green on Sussex and nothing on Somerset. I was dealing with prices in the 1.1s for most of the time I was trading, had green both sides at this stages though from the swing at the start of the second innings, but kept laying Somerset at short prices and then feeding a bit back to get rid of the liability, but never going fully green.

Probably should have got money out of it, but I always thought it was a close enough game and I was doing the right thing. I had €5,200 green on Sussex though! I could have had at least €20 green on Somerset looking back, it was a fair bit annoying every time things got going and you'd get a bit of market panic a wicket would fall. I was probably being greedy not having say €1,000 of the Sussex green on Somerset at 1.05, but I always thought the odds were poor for the match position. I've said before it doesnt bother me certain times when I lose because in my head I'm doing the right thing, but maybe sometimes too I should get some money out of matches, its like that time I had €1,800ish green on Australia and refused to go all green, even though I could for €500.

Pretty much happy overall though because it looked a hard day to win money but I've done everything right, kept my patience and didnt lose. But at the same time were in the results business and when I put myself in good positions I should cash out. Even though I trade cricket, I'm still a gambler at heart and I quite fancied the run chase this evening. Also, how an opener can be left on 90 odd with no support whatsoever through the whole card is a joke! Well played Ed Joyce, the rest were pants. 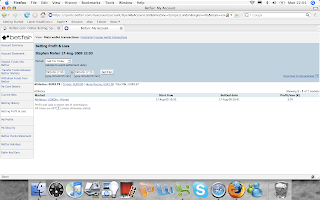