Tomorrow sees the big clash! Few people were writing off Mastercraftsman while I was in the gym this morning, was more than annoying. I know Sea The Stars is good but its not a walkover, at least give Master a bit of respect because it could be quite close tomorrow.

From a betting point of view I thought 1/3 was a bit short on Sea The Stars, I know hes won everything this season but at the same time Mastercraftsman won the Irish 2000G by nearly 5L and battled well in Royal Ascot, showing that the trip poses no problem, to me anyway. Having said that I wouldnt exactly be lumping on Master either at 4.2, but hes still worth a bet to me, purely because people are under estimating him and he looks a bit of value at this stage. Its hard to be confident, but I would really love to see him win, love it!

Regardless of who wins I want to see this happen, Mastercraftsman to get first run on Sea The Stars and ask him to go past. In the Derby Sea The Stars got first run on Fame And Glory, and in the Eclipse he got first run on Rip Van Winkle. So Sea The Stars has had it fairly handy in his last two races, in the sense of everythings went right for him and fallen into place, we couldnt beat him that way so obviously youve to come up with another way of beating him. One thing is certain, Master will give 100%, he'll battle and he wont give up if hes headed. Which is why I think the 1/3 about the favourite is very poor value.

A few people are questioning why Ballydoyle have the two pacemakers, thats pretty much to set it up for Master, the idea that going fast "sets it up" for Sea The Stars is nonsense. Go slow and Sea The Stars will fly by, have to make it a war. Master will like a war and Sea The Stars might not, there must be a reason why John Oxx is keen to avoid running again over 1M4F. Theres lot of angles into the race but it has to be a test and Master has to have first run to win, and if Sea The Stars flys by well hes the best horse in the race and you say well done.

Now, another idea might be to go incredibly slow and make MJ make the running, but if you asked me who had the best turn of foot between the two, I'd say Sea The Stars so that doesnt appeal to me, but I'm sure AP will do what he thinks is best. I dont think I've ever seen him say go slow, its normally always go fast. I'm seriously hoping Master wins, more hopeful than confident though, but I still think he'll win. I fly over in the morning, cant sleep!

See this picture below, thats MJ staring right at Johnnys arse, hope the same thing is happening tomorrow at half three! Frank "I stand in the stalls while they open and the horse runs off without me" Spencer is in the back ground waving and blowing kisses at Seany Levey as he goes past him to finish 8th. 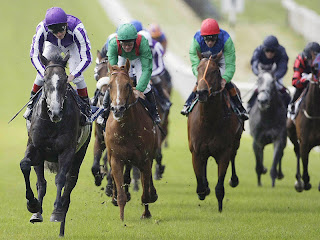