Awful evening, probably the worst one I've had for ages, I'm depressed. I'm normally depressed when United lose but to watch my football bank go sailing down the river too at the same time makes it ten times worse, not even going to talk about it. I knew I was going to come unstuck at some point, that was a given, but for it to happen when I've backed my team hurts, against Burnley too, oh dear.

Anyway, if I thought the football was bad, the cricket was worse! Weve had two seriously hard games to call and trade the last two days and I've been on the wrong end of them both, last nights game was the worst one for a long while talking to a few people, but you do get them games. Tonights was hard enough but it was all me I think, couldnt do a thing right. These two will stick in my head for a while and I reckon the best thing to do is to take a break from cricket for a couple of days, it shouldnt be a problem with the 5th test starting, I can watch that without having a bet.

Its a weird feeling when youve no confidence in anything youre doing at the time. Its like you feel in your head youre totally jinxed and cant do a thing right, thats nonsense really, but you still feel like it. Its the worse feeling when youre having a bet, and straight away in the back of your head you get the thought "its going to go wrong." Its just stupid little stuff that builds up when youre trading, like laying a team, then a wicket goes next ball or vice versa. Best thing to do is stop for a while.

Horse racings going well and I'll stick with that for the rest of the week. Whats it like banging your head off a wall? Trying to beat Sea The Stars! Hes a fantastic horse. I cant complain, everything happened in the race that I wanted too and he still won, hes a weird horse in the sense that while youre watching the race its not impressive but then you look back and think jesus. Is he the best I've ever seen? No idea! I dont know why people always come up with "the best horse ever etc etc" its all nonsense to me, take each group year by year, because we'll never know whos better, its a silly way of looking at things to me, obviously people like to compare horses though. Fame And Glory for the Champion Stakes, our last hope! I actually think he has a great chance, and in all likelihood Sea The Stars might not run with all the rain we get over here.

So a little break from cricket after today. I've been saying about taking things easy and not too much risk taking, well I havent really its just everythings went against me. It wasnt one big trade that went wrong, it was nearly all of them going wrong one after the other. It hurts and sticks in your head, you think about it for days, but what can I do. Only thing I can do is avoid the sport for a small while, its a massive blow. And coupled with the football, today hurt a lot.

Again, withdrew a few quid, back to €200 in the account, thats all. Tomorrow will feel like a fresh start when I look at a nice round number, but more so it'll stop me doing anything silly because the heads wrecked after this evening. No bets with the bookies at all either this week, and just put another €25 in Betdaq for the next football round!

No matter what happens, I'm just going to try a build from this €200, no bets outside of Betfair bar obviously the Betdaq football, go back to thinking small until I forget about the cricket. Awful day. I've had worse days P&L wise but certain days just hurt more than others. 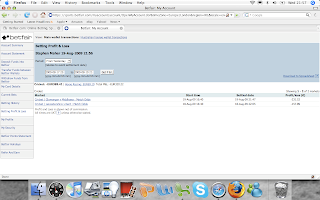