Just back from The Curragh, got absolutely pissed on for the whole day and didnt back a winner, not in the best of moods after Lillie Langtry couldnt pick up in the mud, but the winner won easy so well done to her. Amazed Fame And Glory hasnt moved that much in the Champion Stakes market on Betfair after todays rain, it lashed down, and was a bog out in The Curragh, steady rain all the time in Dublin too. Leopardstown said this: "The latest going report from the Dublin track which describes course conditions as good, good to firm in places." Nearly had a heart attack laughing, who are they kidding, I wouldnt laugh if they said it was good, almost believe them before todays rain, but "good to firm in places" is taking the piss surely, maybe in the stands its a bit firm cause its concrete! Welcome to Ireland, it rains a lot, the ground is soft.

Theres a lad covering the weather at Leopardstown for Betfair too and hes been following all the showers each day, even he thinks it will be soft already. Whatever the ground is like now or indeed ends up like, Leopardstown are lying at the moment. Everyone saw the rain at The Curragh today, that went all the way back into Dublin. Read it for yourself..
http://betting.betfair.ie/horse-racing/leopardstown-races/leopardstown-going-guide-irish-champion-stakes-going-updates-240809.html

Anyway, seething at the Leopardstown officials aside, it was an alright day apart from the horses, less said about them the better. Man City won to take the football bank over €100 for the first time, at the 3rd attempt! Got the last 20 minutes of the GAA and won a few quid, and traded the completed match market on the cricket. I know I said betting on the weather was stupid the other night but someone was trying to manipulate the market into flip flops every two minutes, I'm too clever for that business (would have felt like a sap if I lost though), jumping the market from 1.4 to 2.2 in seconds while the covers are still on isnt the smartest move but I'm sure he probably fooled a few people into it, once you could see what the person was doing it was handy enough to make money off and I was equal green both sides.

Been a steady week on Betfair without anything amazing happening, made a few costly mistakes but was aiming for around €30 a day, fell short of that but won on Betdaq too so it was fairly close. Nice to just have a handy week and move forward, enjoyed myself this week doing the horses in running again which is really nice. Cut out the mistakes and it will only get better, losing €70 today at The curragh on Betfair mobile didnt help mind. 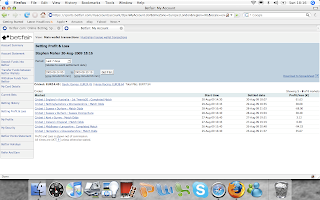 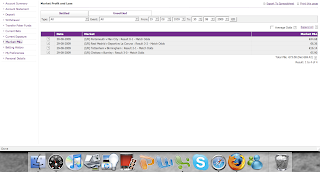