Just a couple of small thoughts before I go, I think it rained overnight although I'm not 100% sure.

2-15 The Curragh
How in gods name Black Eyed Susan is 7.2 on Betfair is scary. Its almost putting me off backing her, I had her in at around 5/2 - 9/4 in this, she was well fancied first time out but couldnt get through the heavy going, Johnny came back and said she lost her action a couple of furlongs out and wasnt hard on her after. Theres a bit of talk about Bolgers, Gile Na Greine, apparently shes a good one but I dont back two year olds first time out so happy to take her on. And I dont understand how Jade Jewel is favourite, that was a woeful race at Leopardstown, it was only between the first two in the betting and even then their below average, its just not form to make her a favourite in a race at The Curragh. You have Weld and Oxx newcomers too, the odds look so wrong to me this morning it makes me think I'm wrong! If it rains before the race I'd fancy Black Eyed Susan a lot less, but shes a massive price on the face of things, might even get bigger nearer the off.

2-45 The Curragh
Hard to pick between the front pair. Casual Conquest was well below par at Leopardstown the last day, even if he needed the run, he must have needed it massively for that to be an excuse, but hes a fantastic horse. Curtain Call always saves his best for here so hes a hard horse to catch right, its between the two of them, I thought about backing the both of them on Betfair but its such a little return for a big outlay. If there was a slightly bigger return I'd do it.

3-45 The Curragh
No bet. Although it does look between Miss Chaparral, Redera and Via Con Dios. You could have those three on your side and take on the field, but at the same time I wouldnt be that confident of the winner coming from those three to put up a certain amount of money. You could back the three of them coupled at evens on Betfair at the prices now.

4-15 The Curragh
The most open Group race to be ever run here. EVER! Every one of them could win.

4-45 The Curragh
My only confident bet today, Famous Name, I know theres nothing original about backing or tipping odds on shots but he looks to have a fantastic chance today, and is likely to go off shorter than the 2/5 he is now. I've never liked Three Rocks and happy to take him on, hes probably ran more than any other horse this year! And Poet has had his chances. DK has placed Famous Name to perfection on his last two runs and hes found another good race for him today, its hard to see him being beaten and I'm happy to back him at 2/5.


5-15 The Curragh
Whole race centers around St Nicholas Abbey, and hes very much a wow horse at home. If he ran like he works, he'd win this on the bridle, seriously. I'm not a fan of backing two year olds first time out so I dont mind letting him go off at 4/6 without backing him, he'll come on for the run too obviously coming from AP's. But its just a race to watch and see how good he actually is, I think he might be a superstar but we'll see. No idea how he'll handle the ground though. Definitely a no bet but a serious horse to watch today.

Hopefully United do the business for my football bank too! 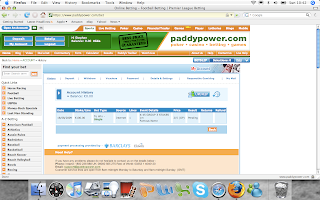