Oh dear. I've been saying it might happen at some stage this summer and the time it happens is the one time I've no money on the test match! Havent got pictures this morning so I've no idea how their getting on right now, but the match was over last night, well it was actually over in the first morning but anyway. I only read one paper over here, but I dont agree with making lots of changes, I seriously believe thats why England are the way they are, one batsman fails and all of a sudden its get rid of him quickly. Too much pressure. Its got to Bopara, shame to see really. What do you say, everyones calling for massive changes and its only 1-1. BUT, I do have an issue with Ian Bell being in the side, that should have never happened. All the stick KP gets when he gets out for under 20, when hes not there they look weak, basically the long and the short of it is theres too much pressure put on the players by the press and the fans, and too much criticism. Alright if someones crap, but talk of being dropped after one poor game is total nonsense, did the Aussies drop Johnson even though we were all laughing at him? Nope.

Anyway, backed two horses, going off what I was told but havent gone it too heavy. One has already won and one runs later today, wont get the result until tonight though. Part of the break was to control my staking and my discipline, even though I've another week to go I really think its helped already. More relaxed. Its easy to get fed up with the day in day out horse routine, but a break always does you good, and more times than not it fixes a poor run of form, I'm going to come back with a new attitude. I think I was trying too hard before, like trying to win €150+ each day or whatever, €20 profit a day is fine, its brilliant sure. You win more when youre relaxed, when theres no pressure, when youre happy and when comfortable with youre staking. Why do England win against The West Indies, because their relaxed, no pressure, happy and comfortable with their game. Simple.

Havent had a bet on Betfair and that will continue. Shouldnt really have a bet over the next few days either unless one of APs is fancied. I did have a cricket bet with Bet365 on the Australia runs line, they put it a bit low purely because England scored so low. And got a call today, theres free money on the United v Chelsea game but I havent done it. To win on penaltys was 8/1 each of two with Blue Square, then lay the draw obviously. I havent done it but if I was at home I would, just cant be bothered over here and only have a small few quid in Betfair to stop me betting!

I'm gonna start my €25 rolling fotball bets on the first day of the season, will put it up somewhere on the side there, its only a bit of fun to stop me betting too big on it but I'll take it seriously because its whole bank every bet! See how long I can last anyway, starting with €25 its grand even if it goes wrong ten times during the season. I'll keep it to Betdaq only, be easier to keep track that way. 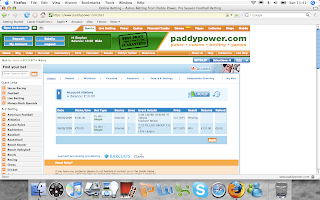 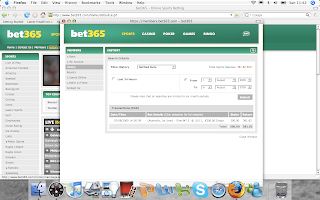