And its been a good one! But massive changes come into effect from September onwards -

God I'll miss the GAA, since it started this season on Betfair alone the P&L reads - Gaelic Games: EUR940.91, still have the finals to push it over a grand hopefully but wish it was on the whole year!

Anyway, those five things have a massive impact on me, my personal life, this blog and this challenge. College being the biggest of them all really, start back at the end of September, going into a honours degree class in business, with accounting and computers. So, will be away from Betfair most of the day each day. I'd rather be on Betfair! Its hard to go into college, but anyone that works will understand this, its very difficult to make any real money when only limited to a small amount of hours, and normally youre busy while all the good stuff is happening. So obviously I'll have to lower my sights a little.

I'm definitely going to keep going with the blog and the challenge, would love to complete it some day. I'm leaning more and more to the idea of just trying to win say €30 a day and its going OK for the past few weeks, I really want to get myself into this mindset before I actually go back to college, just incase I come home some day and start having €250 plus on something! Theres no possible way of winning that back like now, so you start chasing at bad times (when youre free) and it can only go badly. I'm pretty much cut off from the horses all winter bar weekends but love the jumping and go nearly every weekend, have already talked about soccer and wont get too involved bar the Betdaq bank and well I dont know what will happen with the cricket. To be honest I dont know what will happen with anything because I havent seen my timetable yet.

I cant recommend the little by little approach enough. Yeah you know, I understand its painful, sometimes boring and strongly tests discipline but it really is the only way forward in the long term if youre serious about gambling. The yo-yo effect each day does you no good mentally and you miss out on far more opportunities because of it. Things have changed, its ten times harder to make money on betfair than it was before, whatever it may be - recession, lack of money in markets or premium charge, its harder. I've been mentally shot about 3 or 4 times since leaving college in May and have had to take weeks/days off to recover and relax, its hard going trying to work wonders everyday. But slip into a calm relaxed mode of winning €30 without doing anything amazing and it makes life so much better, theres no worry and everything is easy. I've really noticed the difference these past 2 or 3 weeks, far more happier, relaxed and care free, whats important to me as well is I'm not thinking of gambling while I'm away from the computer. Everyone has to switch off.

The end of the month also means I can change my fantasy football team and get rid of Owen, not been impressed by him at all so far. Bit worried as a United fan at the moment, dont like our midfield when I look at the team sheet each game, it just doesnt inspire me with confidence. Happy enough with my fantasy team now though, hopefully get a few more points! Having watched Barca play twice this week, I can honestly say I hate Ibrahimovic more than any other footballer, cant believe the money they spent on him, I really think he ruins the way Barca play because of his lack of runs/movement. He'll score a few goals in the Spanish league obviously but I just dont think he suits Barca's style of play, we shall see anyway. 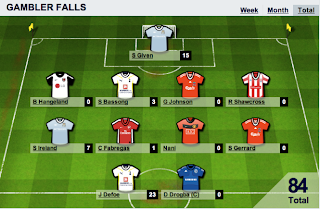 I suppose the question on everyones lips at the moment is whether or not Sea The Stars will run in the Champion Stakes on Saturday. Personally I dont think he will, the ground can hardly be any better than it was on Irish Derby day. Anyway, its rained all day in Dublin today, some pretty heavy showers too. Maybe the clerk of the course will call the ground "firm" tomorrow after all this rain! Honestly, I've never read such nonsense as "good, good to firm in places" that they stated it was the weekend, weve not had this such rain for ages, everywhere else is heavy. You know, I can understand it because they want to sell tickets and that, but the market reacted to it too, which is properly unfair to punters. Paddy Power have a market on whether he'll run or not.. 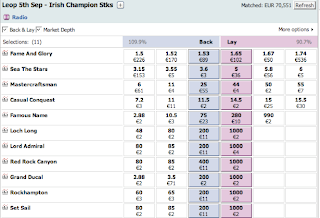 I think the market on Betfair is more interesting anyway, and can hardly have a bet on a horse to run or not! Although I could understand people wanting to back the 4/7. I reckon Fame And Glory will go off at around 1/3 if Sea The Stars isnt there, and I'd probably back him too at that price so wont be laying off my 7/4. Heres a photo that was taken today at around half one, before all the rain hit, it was already fairly wet anyway.. 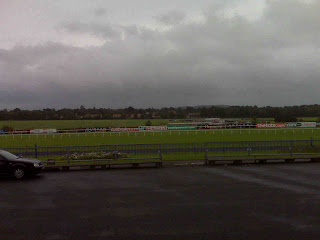