Feel the rhyme.. Get on up.. Its Kieron Pollard time! I reckon that was greatest, biggest, most amazing 20/20 knock I have ever seen, like wow, 54 off 18 balls, fook me, I couldnt even do that playing stick cricket! Traded the market like a bit of a mug, had massive, massive green on T&T, but squared up at 1.04 when I thought it was over, wanted no loss, then Pollard goes mental. Amazing. Managed to grap a screen shot of the prices matched on New South Wales, I'd guess nearly a few careers on Betfair are over after that one, weve all seen gubbings, but I've never seen one like that, went from 1.03 to 2.1 in one over. 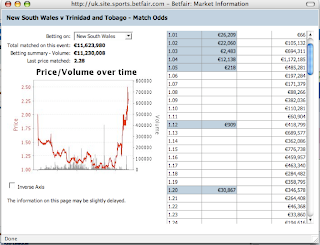