I'm not able for the all day gambling/drinking stuff anymore, getting old, I woke up with legs/head/arms/back stiffer than a bangkok prison sentence this morning, having breakfast at half two in the afternoon feels rather weird too but anyway it was worth it to see Pacquiao v Cotto. And was in Punchestown and Croke Park before that. Pacquiao was class though, max bet on Cotto and absolutely no complaints. Whatever about the speed and power, the thing that amazed me was Pacmans chin, Cotto landed some flush proper shots and although he felt them, he took them well and came back with his own, which Cotto couldnt deal with, that punch for the second knockdown, still surprised he got back up. In the opening few rounds though I thought Cotto would win, went down to 6/4 in running, like he could out box him and was getting good success that way, just when Pacquiao opened up he was far too good, Cotto couldnt trade with him at all. One of those times just have to say well done to the blokes who backed Pacquiao.

Apart from that two solid odds on bets on the horses with Paddy Power, some people dont like backing short odds, I've no problem with it, in fact I thought the prices were quite high in terms of what they had to do. Hangover from hell today though so that'll be the end of it. No Ref has ever annoyed me as much as the one in the Rugby here too, I'm totally bias obviously but its like the fooker has backed Australia, weve been shite too though, its annoying! I'm still seething they didnt take the easy three points in the first half, instead go for some shite kick sideways that comes off about one in ten.

Have a bet open on Jedward bottom two tonight, I'll sort it out later with the total, but heres the screen shot anyway..

How in gods name they were odds on before the show even was close to starting I dont know, even if they are in the bottom two, there wont be a word of moaning out of me. Anyway, P&L last two days..

End of a weird week, zero in every market I entered until Friday. Then have €400 green on the Saffers and it rains, by the way they posted 240 in a 20/20 game against England today, I know that has basically nothing to do with the other game but I'm still full sure they would have chased 200 bar the rain. Unlucky with the draw on the boxing Friday night too, but it was close you know. Then the Cotto bet made it a losing week on Betfair (could all change with the Jedward bet though), few wins with the bookies again to make things level going into the X-Factor tonight. Once again, the most important part of my gambling week comes down to X-Factor! 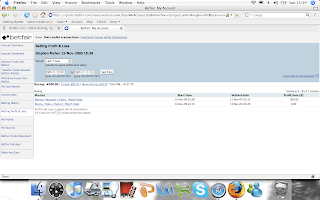 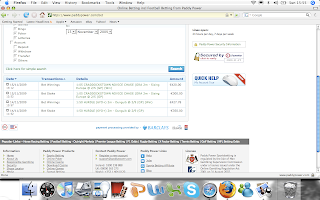