Early finish to my week, the site is buggered for me for the last hour and theres not much on bar the footie, which is fantastic by the way, Arsenal v Chelsea, Barca v Real, lie on the couch time. Cricket this morning was simple, Saffers collapsed all out for 119 and England chased it down without giving me any worries - theres something I've never said before. Game shouldnt have finished til near 4-30 but over already. Not rocket science betting and handy enough.

Absolutely trilled Fairyhouse was called off too, couldnt find my sunglasses anywhere this morning, was in a state of panic. Honest to god, were going under water soon I'm telling ya, I'm not joking when I say I've never seen as bad weather as today, its unreal.

Few updates, my laying system has made a 30 point loss in its first week, ouch! Glad I'm just testing it anyway. I presume if a laying system is making a loss, it then becomes a profitable backing system? Yes? No? I think so! Still there'll be no money down on it until sometime next year. I'm clearly pants at laying however.

As for my football bank, withdrew the money this morning from Betdaq after only having one bet this round (and in the last month), gonna scrap it, lost interest really. Man City knocked me out of Last Man Standing yesterday too, and it didnt even bother me. What I was thinking is, after been through a lot and learned from it, I want to give football another semi-serious go. Last time I started with €3,000 and made upwards of €14,000 before coming back down to level in a matter of two weeks. Havent bet seriously on it since, and it changed a serious amount in my gambling too. But I reckon if I start with a set aside bank of €750 and try build it up, €50ish a bet this time, stick to around those stakes, and having the experience from last time, I'm not gonna lose the head and I'll stick to the game plan this time. Who puts €4,000 on Chelsea away in the Champions League, fooking me! Of course at the time, it never feels stupid you know that only comes with the benefit of hindsight. But, that'll never happen again with set staking plans and you know the once bitten twice shy effect. I'll give it a few hours thought next week anyway.

As for this week, been really good. Most, if not all, of my bets have been in running. Only loss on the cricket but no issues or complaints there. Just basically a solid week without doing anything fantastic, couple of days off and you know didnt even have any worries throughout the whole week. If every week was like this one I'd be a happy man, after changing things a little after last Saturdays loss, I couldnt of asked for a better week.

Site has a planned upgrade tonight, so it'll be buggered and then again on Monday night/Tuesday morning (I think) so it'll be buggered for another day! Why cant they do it all at once? I dont know. I suppose I'll have to go into college then if Betfair isnt working properly. Strong chance there wont be any bets until Wednesday onwards next week, theres not much on anyway sure. 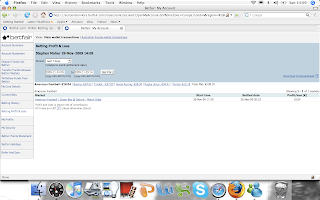