That make everything worth it in the end, days like today make life better you know, what a day for national hunt. Denman - absolutely amazing. That jump at the cross fence, bloody hell, just an absolute beast, goosebumps. And Go Native winning in Newcastle, nice little performance, once he has his good ground (in any sort of way good ground, would get away with good to soft I reckon) hes a serious horse. The fact hes still bigger than Binocular in the Champion Hurdle market is laughable, Binocular couldnt even get the job done against a weaker field last year sure. I love this horse though, I really do, my favourite national hunt horse and only second to St Nic in the Maher love stakes. Just looked back to the start of the blog results in excel, I had just under €400 before he ran in Cheltenham and that got me up to over €900, never looked back since. Just a special horse to me for so many reasons you know.

Throw in Ireland beating South Africa and United winning, youve got a pretty damn good day. Was busy for most of the it though so didnt have a bet on the horses for here, small few quid cash on Go Native just cause it was him. Caught the second half of the rugger. Really caught Ireland at the perfect time, wave after wave of pressure and was pretty simple to ride the market/team/crowd momentum. I love betting in running sometimes. Just the perfect timing to enter the market, often I call things perfectly but have fooked up beforehand and dont bet on it correctly, while when you pick the right time to enter the market youre laughing. Today was down to luck rather than skill but anyway. But if you sit there, watched things a little, then picked a good time, you know, things wouldnt go far wrong. Quite often I'm seeing the biggest swings are closer to the finish and if youre still fresh coming into the market you can make some serious money.

Having said that, All Blacks game was completely the opposite, it was quite obvious they were miles better than France 20 minutes into the game and waiting would see the price gone. Was on them, then off, then back on, always favouring them just protecting my position throughout at certain times you know. Without being too nervy and clicky on the button, for example I'd back them at 1.54, lay off the stake at 1.3, then decide to be back on them at 1.26 or something, know I've given away a few ticks but just to be happy in the market for me its worth it you know.

Anyway, fantastic day, maybe not uprooting trees in terms of bets and profit but just for pure sporting greatness, fantastic. Often wonder what peoples lives are like who dont follow sport, I dont understand them really, but they must be fair bored at times. Denman winning, Go Native winning, it doesnt get any better than that you know, what a feeling, didnt have a cent on Denman and I was roaring him home.

Just to say too, I'm an awful tosser at times, hung around til 1-30 last night for that cricket game, go to enter bet, says its Australian wallet, doh. What a clown I am. Must get it sorted, although reading what you have to do, is it worth the effort? Had a brief look on Betdaq, shite, the gap between the back and lay prices was a joke. You know I like them, their alright people, alright for before the off, fairly terrible for in running though. 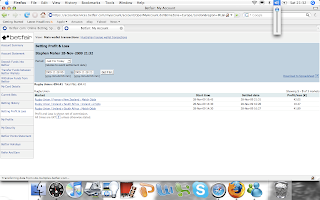