GREATEST OF ALL TIME 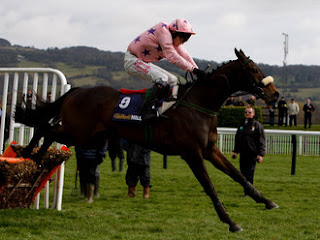 Of course one must keep the feet on the ground, it was only a silly little race at Newcastle against Binocular etc, whos Binocular I hear you say? Hes nobody. Why'd they call him Binocular, cause you need Binoculars to see him that far behind Go Native? Today was only a small little stepping stone to becoming a two time Champion Hurdle winner and a three time Gold Cup winner before coming home to live happily ever after with me, where I promise we'll sit and watch him winning every day for the rest of his life.

There isnt a horse in the world that can touch him. John Oxx wants to bring Sea The Stars out of retirement to try and beat him, the owner has said no as hes scared Go Native will win on the bridle by 5L with Carbs sitting on him with a bottle jamesons in one hand, a guitar in the other singing Barry White youre the first, the last, my everything, while wearing an Elvis costume and sunglasses (not for the weather just for effect).

Now youve been told, go now and impart this wisdom to the world. He is unbeatable. He is the greatest. He is the daddy.