Gimme Something To Bet On..

Another two blank days in a row in Maher towers, its not by lack of trying anyway, no cricket on and Cork was called off Monday. The daily UK racing is hardly worth not going to college for, but I've managed to pull a bet out of the fire for the weekend..

Notre Pere each way for the Betfair Chase at 3/1. I know 3/1 isnt really an each way price, but if he does place you get 60%, so for the chance of him winning I reckon its well worth it you know. Obviously the reason I went each way was Kauto Star, I personally think Notre Pere can beat him, while I dont really and truly believe it you know, I'm happy with €150 E/W at 3/1 anyway. Theres the added bonus of ante post terms too, if only four runners turn up, you still get 1-2-3. The weather forecast isnt looking great and its already expected to be soft ground so that should right up Notre Peres street, he doesnt necessarily need heavy ground either. He was going well when coming down in Down Royal the last day too. Kauto doesnt really like heavy, well lets say he isnt at his best on it at least, theres bigger targets to come, first run of the season and already been beaten here. All reasons to believe that if he was to be beaten, nows the time. Jim Dreaper said he'll run, and he doesnt strike me as a Jim Bolger type so I can presume he'll turn up on Saturday. Hopefully he runs anyway, I cant really see anything in the race to beat him bar Kauto, gutted if he couldnt beat the rest of them, anyway if he doesnt run now after I've told everyone I've backed him I'll be more embarrassed than a virgin at a gang bang.

I've also entered the new Last Man Standing, had to, I'm addicted now. I'm gonna start up a new Betdaq football bank again too this weekend, this time instead of backing teams I'll be laying, wont be getting any golden stars for the odds I'll probably be laying at, away teams to the big four mostly (minus Liverpool obviously!), but sure we'll see how it goes anyway, give it a try. Wont be an AWE-IN tactic but it might be at the start and then go from there, maybe a little in running too we'll see, start with €100 sure and play it by year, handy to just keep it to Betdaq. You know whats going to happen anyway, the first team I lay will win.

As for my X-Factor betting, tis finished, tis over and tis it. I've come to the conclusion that with only six left, its a pretty bad bet to be laying bottom two. Theres a bit of logic behind it too, Olly, Joseph, Stacey and Danyl are good singers, however they bore the absolute shite out of me. Lloyd is pants but he has a following, the problem is Jedwards following is sort of tied in a little with Lloyds following, i.e. horny teenage girls, you can probably see it from the last few weeks. Lloyd bottom two, then bounces for Jedward to be bottom two, then a re-bounce this week. Problem is that wont help either of them if the others are good. So, no bet from me. I still have €1,500 green under Jedward in the win market, do I believe they can win? Sort of, I dont not believe enough to lay them at 17 anyway, so I'll leave it for the time being. The X-Factor Betfair P&L stands at €470.66, while I got another €481.25 from Boylesports for top group, Jedward will forever be in my heart. That sounds a bit gay now I've typed it but anyway, only bet I lost on X-Factor was laying Lloyd bottom two, the tosser.

Speaking of music, total and utter disaster today as my iPods broken down, fell into the sink full of water. Its my baby. I'm heartbroken. I now have to listen to people on the bus in the morning talk about how Roy Cropper died on the way to college. Roy Cropper? Roy Cropper, the bloke who went out with a transvestite in the cafe, fook sake. I've to go to the gym and listen to some woman moan while on the exercise bike about her legs being too fat, of course your legs are fat, youre going two miles an hour while eating a nutrigrain bar. Thats not the worst of it, I've to listen to Matt Chapman on ATR too! No wonder I havent had a bet. Its not that I hate the world, just sometimes I like to shut it out you know, I'm not the needy people type.

Oh dear by the way.. speaking of needy people types, as a practical joke, one of my so called friends has signed me up for an internet dating website, so I'm faced with a barrage of 50 year old vaginas every time I sign into my hotmail account. And I've no idea of the password to stop it, god knows what hes been saying to them too, its a fantastic joke you know, just as long as its not happening to you. God help me, every one of them is fooking insane. "What cha thinking about my dear?" Oh I dont know, we met on an internet dating website, I'm thinking about you know not having sex with you and how I didnt masterbate to your profile picture for the last 14 nights in a row, what about you. "Sooo, how do I look?" Like shit I met you on the internet, but I couldnt do any better so you look brilliant.

D'ya know what else I found out today? Ireland has the highest percentage of helicopters per person in the whole world. Arent we a great bunch of lads altogether, who said we were a small nation. I can fully understand it you know, I mean the Galway festival is a long way away from Dublin like. One thing I still dont understand though is why were in a recession, must be the price of helicopter fuel or something. 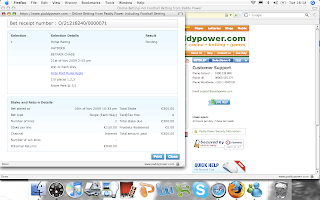