Well, the whole country is at a standstill over it so I might as well say something. Firstly and most importantly, theres no point just moaning about it, do something about it and contact FIFA, tell them what you think, just moaning will get us nowhere.

Dont call them any names now. Whatever you may think, but if we all send in something it might work, odds on it'll probably fall on deaf ears but sure tis the only thing weve got you know. Then when theres no chance of a replay, we'll have to stop moaning and accept it, were a small bit in danger of turning into the BBC here and be talking about this in 20 years time.

The whole nation is gutted obviously, theres plenty of hysteria in the press and on tv about it, and theres plenty of rows because we all have a different view. Anyway, in my opinion (obviously I'm Irish so I'm bias)..

Is Thierry Henry a cheat? Yes.

Thats the sad thing, football has become laughable at this stage, nearly every player cheats these days, you cheat to win and its alright unless youre caught. Anelka knew what he was doing trying to fall into Given for the penalty. And Kevin Doyle wasnt really blaming Henry after was blaming the ref, they all think the same.

It is wrong? Yes.

Does it make an absolute bollocks of FIFAs "fair play" idea? Yes.

If they do nothing and continue with all this "fair play" campaign, they become total and utter hypocrites.

Garrard, Ronaldo, Drogba, Eduardo, have all been known to dive at certain times. And basically nothings been done, Eduardo gets banned then appeals and its over turned. Whats the point of teams playing by the rules if their going to get pissed on by the ones who dont? As I said, cheat to win and its alright once youre not caught, takes away an awful lot from the sport. And it feels terrible.

For the sake of "fair play" there must be some sort of thing done about it, otherwise whats the point of rules you know?

I entered the Last Man Standing for this weekend and have €100 in Betdaq ready to have another go at football, but you know it just feels like I dont want to bet on it after seeing whats happened. Just lose faith with it you know.

Anyway onto today, played in running a bit, won €12! 12 quid won is better than 12 lost sure, bit of a shite day to be betting really but nothing else knocking around, didnt have a bet yesterday either with the match being on. The one losing bet was a bit stupid, backing McCoy when under a drive, just because it was McCoy. Shouldnt have done that really. And the biggest win was simple, laid the front runner because I thought he was going too fast, apart from that struggled to get matched and was on the phone half the day about the football.

Hopefully South Africa v England tomorrow is a good game, and hopefully the weekends racing goes ahead, other than that theres nothing on. I'll have to start building a boat if the weather stays like this! Might trade the darts later but we'll see, either way not leaving the house anyway, its cold outside and the wind tosses my hair. 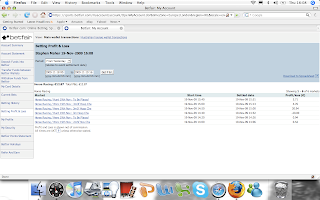