Due to the recent adverse weather conditions, Paul Nicholls, speaking this morning from Ditcheat, has taken the necessary steps to insure Kauto Star can keep up with Notre Pere on Saturday.. 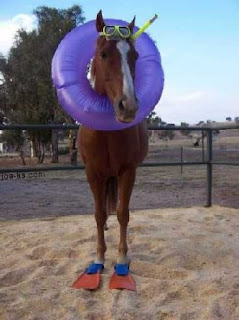 I've also discovered the one bookmaker I absolutely hate the most this morning, Victor Chandler. Dont really fancy anything very strongly today but theres a bad each way race in Dundalk, the 8-00, the favourite Excelerate hasnt ran for a while and has been taken out the last two days because he was lame, hes the best horse in the race and deserves to be odds on but theres every chance he may need the run you know. Then we have the second favourite Six Of Hearts who has decent enough form, enough to beat the others anyway and if you go back through his runs from a while ago you could argue he'd beat he favourite too. He likes good ground and is at his best on it, heavy ground doesnt suit so I wouldnt read too much into his form on anything worse than soft, surface at Dundalk should be no issue really. The 1M trip isnt his best (thats 7F) but he'll probably get away with it here, its not that he doesnt stay hes just probably better over 7F, its not a great race anyway and he has the best man for the track sitting on him too in Fran Berry, ideally he comes with one late run and thats enough, no better man than Fran to judge Dundalk anyway.

I understand its a bad each way race, and I understand bookmakers dont want to be caught, so by all means limit the race you know, I understand that. But fook sake, VCbet go best price at 100/30, I ask for €150 E/W, says stake is too high for the event try a lower stake, then by the time I put in €100 E/W, theyve gone 11/4. GRRR! By all means limit, but dont change the fooking price without laying it! Boylesports limit you, but at least they take something, even a tenner. Whats the point of going best price if you dont want to lay it anyway. Tossers. Highly annoying when you deposit and then have to take it straight back out again, I presume it'll take five days to clear or something, all for nothing like.

I think the 100/30 was just fantasy, so I'm still happy enough at 3/1, 60% if he places. Paddy Power, Boylesports, Bet365 and Blue Square all wont lay me what I want though. However, Ladbrokes to the rescue, fair played to them credit where its due you know, its a winning account too, well done to them they'll take a bet, If I lose they deserve to have my money.

Crickets been rained off too in South Africa, raining everywhere. Traded the darts last night to win a tenner, had big green on King but Barney was too good. The Taylor match was close too before he decided to go into second gear. 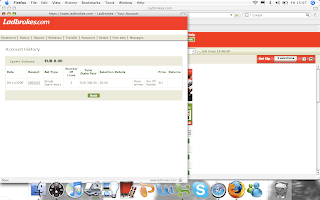