An Internal Error Has Occurred

Well, I'm sure everyone will know how pap Betfair was today. When you do a bet and it doesnt come up on the market, I think thats actually worse than when the whole site goes down, because you could click ten times thinking no bet has gone through when it has. Luckily enough Gruss showed the message saying it went through but it still wasnt coming up in the my bets section or the market. Stressful. Got out straight away though in a matter of seconds and then couldnt bet obviously because couldnt trust it.

And while all this was happening for International users, English users were grand. International users couldnt cancel bets and then couldnt place bets, thats a serious advantage for the English users. Fill or kill on Gruss was handy today. They should just take it down when that happens. What do you expect though, it was a Saturday.

Anyway, no problems at Betdaq except maybe not as much money coming through the market but thats not the end of the world. Schoolboy error this morning thinking the first game started at 11-30 when it started at 9-30, market went from 1.01 to 3, then back to 1.01, I missed it all and only won a Euro. That said I could of lost a fortune too. Second match was difficult enough to trade (and Betfair went down totally in between!), Delhi werent that impressive but Punjab never scored enough runs, no real opinion on either team yet. Delhi started at 1.16, went out to 1.8, before winning. Starting to think you could just lay low odds blindly early in the game and see what happens, but were only 3 games in, and theyve all been mental.

Pacquiao fighting tonight, amazing how low key the build ups been, any talk of drugs whatsoever and people lose interest, Clotteys never been stopped inside 12, but sure you cant back against Pacman until he agrees to this Olympic testing, because you dont know. 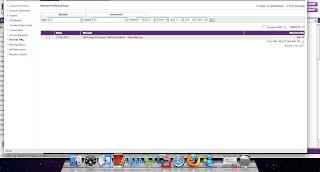