Well, That Was Weird

Ever see a particular round in boxing matched at 4/1, 5/1, 6/1 before a fight? Rumor had it he was supposed to take a dive, well the 4th round came and went without a bother. But the market was odd the whole way through, Smith got seriously cut twice in round 1, yet the market held his price (which went from 4/9 to 1/4 beforehand) until we past the 4th (HA!), then he shoots out to 3 with nothing happening in the 4th bar a bitta man hugging, then finishes well to end up winning in the end, fair enough you know, but it was oddest set of events..

I for one never believed it for a second, sure I mean have you ever met a crooked Scouser? Never. That bloke Stevie G, he never dives. That and the fact I couldnt get on, Bluesq max bet was €2.75, PP was €3.30, Ladbrokes was €6, Boyles was €0.75 and Bet365 took down the market. What a bunch of bleedin' amateurs, at least when this sort of stuff happens in football they get the scoreline right FFS. 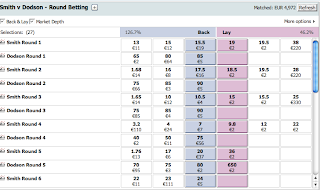 First day back in the IPL, 1.05 gubbed. Christ. Head in hands man. Its sort of nice in a way because you tell yourself not to back low odds etc, you expect it, then the first game it happens just to actually prove it that theyre so untrustworthy its unreal. Anyway, was an odd market and I suppose I can expect it from now on and get on with it, for starters Deccan SP was 1.6, captain at the toss said they wanted to keep them down to under 150, the team scores 162 after being 0/2 and 1.18, so the halfway price was 1.49 just purely on how they got the runs rather than the actual score, the market went low so it wasnt letting it go back too high. The 150 runs line was 2.6, so clearly one price was wrong.

So, I laid, and Gilly comes out and smacks it around, market goes 1.05 (I'd bailed by then), he gets out and they collapse from 99/2 to 142/7 at the end. Still a one man team from last year then. I'm annoyed I lost on a low odds gubbed game but I was in the market at the wrong times, filtered over €2,500 through the market at different points and never once had a chance to go awe-green. Just wasnt a goer for me, €50 loss is alright considering when things go pear shaped I usually lose more.

YouTube is around 30secs behind ITV here in Ireland. ITV is right up to speed and the market wasnt moving a lot before it happened on the TV, which makes a change. Right, slightly annoying thing, ITV are blocking out the Indian ads, fair enough, but today their ads were longer so we kept missing balls, missed a free hit (how fooking important like..!), missed the start of overs through chat in the studio no need for that, and there was a wide and they went to a break FFS, forgetting he had to bowl it again. Alright, they dont do cricket normally and it was the first day, and luckily enough nothing major happened off the balls missed, but if they do it again and something happens there'll be uproar.

My few things to take from the game were, never take on Gilly - its just not worth it, the Deccan tail starts at 4 - if the top 4 dont get them the rest arent, Ganguly out for a duck - jury still out, the pitch was quite good (Mumbai), outfield lightning and the rope in - think par was probably higher than 160 but they were two poor enough teams really, KKR will improve for Gayle though (obviously!), and most importantly - I need balls of steel trading this, I'd slightly forgot about that, I laid the loser basically thinking they wouldnt get the runs but lost because one man took the market away from me. Like, if I'm of the opinion not to back 1.2 because it flips so easily (and it did today!), then there'd be an argument for not going awe-red and letting it ride, with the max bet I'd never be overexposed anyway so it could be idea. Of course there'll be trains but you know, I'll of backed my opinion I'll take it on the chin.

I think the more you try make sense of the IPL the more confused you become so fook it, onwards to tomorrow.

1.05 was gubbed in the rugby league too. And I hear Inter got gubbed away from home tonight. Bad day for the money buyers.