Sun shining and flying up The Curragh on a Sunday afternoon, you'd think it couldnt get any better. Christ it was a long day.

I'm hugely aftertiming here but anyway a few reasons why the horses lost.. we had some nutter throw a stone at one of the horses in the car park as youre leaving there on the side of the walk up where the horseboxes park and we also had some drunken even bigger nutter abuse Johnny, called him every name under the sun, some of them I hadnt even heard before FFS!

You lose faith with punters though, like AP has said from the word go the horses will need the run, the horses will come on for the run, why cant people factor that into their betting you know? Or at least be a bit more philosophical when they lose? You know, I think I discovered today that you cant win, you tell 'em the truth and youre wrong youre slaughtered, you dont tell 'em anything for fear of being wrong and its why didnt you tell me.

Anyway, the first race was a complete shock. Even though I dont back the 2yo's first time out, I can honestly say that if I thought he was going to do that he wouldnt have gone off 9/1 on Betfair. I dont bet in hundreds of thousands like they do on the Betfair forum but he still wouldnt of gone off 9/1! He picked up really well though under hands and heels, was real impressive.

Alfred didnt run any sort of race, probably not a great fan of the ground, he got awful tired at the end I thought, he sort of made a little bit of ground and then just fell in a hole. No excuses there. Was giving them weight, he wasnt good enough.

Now, Fame And Glory, the one who caused all the trouble. Er, you know, he was just working with Dixie Music, who ran in the race as well, and beating him handy every morning, cruising past and looking a million dollars. I think they both sort of kidded us into thinking they were more forward than they actually were.. I'm not sure you know, only guessing. Surprised Fame got beaten to be honest, didnt see it coming, although wasnt a backer at odds on first time out but I still thought he'd win handy off his homework. In my opinion (and I've photographic evidence below! Fame in the red under Seamie and Dixie near side under Seany), I think the work between the two kidded us into thinking Fame was more fit than he actually was, and sure enough like, they finished exactly on the track as they do at home. Thats no good for people who backed him today though, I've no real words there you know, I was in the same boat, I thought he'd win just wasnt backing odds on. 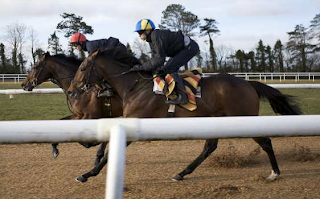 Then in the last, I joined the fingers burnt seethers group with Bold Quest, the books priced him up at 8s this morning, unbelievable considering Joey rode him the last time and owned by Anne-Marie, of course Joey was going to ride him sure. They were more sort of equal rather than 1st string/2nd string. I got 8/1 E/W, 13/2 E/W, 6/1 E/W and 11/2 E/W. Sent him off 9/4, and he got absolutely chinned on the line for 3rd, and guess what, the stablemate we gave no chance to on the ground won. People are seething because they have to guess what were doing, were fooking guessing ourselves! That hurt anyway, the sick feeling in the stomach sort of bet. Same old story though, you can get whatever price you like, the horse still has to do the business at the end of the day.

But anyway, everyones entitled to a view, just wish they were a bit more understanding to what actually happens horses and jockeys in a race instead of just pure bashing them every time. It'll never change though really so I'm probably only annoying myself listening to them.

Hopefully Tiger can put in a monster round tonight, he'll need to, he played like an utter mug last night! Never seen him seethe like he did after the bogeys on the first nine. I'm prepared to be called a muppit if I'm wrong here but I cant have Westwood winning and would be amazed if he won. Need Mickelson to have a poor round too if Tigers winning, the way it is Tiger has to shoot low and then get help of the leaders falling behind as well. Should be a good nights viewing anyway, I'm glad my position is in cash, because I would have gone awe-red at 10 or 11 last night, thats why my position is in cash though I suppose, I'm a woeful golf trader. Its more in hope now then expectation Tiger winning.

To tie up the week, its been a good one, a winning one, only small compared to others but sure I'll tip along and keep going no worries. Cricket wasnt happening at all and had some horse losses, in running went well though with Aintree. Boxing chips in as it does every week, wish it was on every night. Its been a awfully long day today, looking forward to lying in bed or the back garden all day tomorrow. 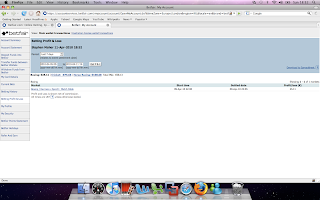