I dont think any real racing man could begrudge McCoy winning the national, absolutely delighted for him, you know if ya werent going to back the winner, hes the one man you'd like to see win it having never done it before.

Sightly annoying they let King Johns Castle go under orders given he was having none of it for a long time before the tapes went up, harsh on punters.. especially me because I backed the hoor. Snowy ran a cracker though, happy with him to get around in one piece finishing in the top ten, that weight stat was blew out of the water too.

Lost €20 on each but there was huge amount of free money knocking around the place today, it was unreal! Vic Venturi and Madison Du Berlais two horses off the top of my head would were freely available to lay in the place market after they fell. I actually ran out of money with four fences to jump or so laying fallers, I wouldnt mind I was seething at Betfair "FFS the bet wont go through.. oh hang on, I'm skint!" That was easy anyway, and when you think I made €60 on the bank holiday just nicking €3 off every race with no risk, today I could lay fallers, I wish the general public would bet more. It'll be back to shark v shark during the week, but sure no one in the general public cares who wins Monday through Friday, and its not gonna change either.

Cricket today was like being in the twilight zone, two matches followed the exact same pattern to a tee, to a tee! Started the chase around 1.3ish after being set a low total, early wickets for a flip flop, run rate so much so in hand could still win handy enough. Lost on the first one because I dont trust Deccan, so when they lost wickets I thought the collapse was on, whereas had faith in RCBs batting line up to lump on them when wickets went down. Lost €100 on first, won €100 on second. I'm fantastic at doing it I have to say.. I cant possibly win on both games, has to be one loss one win! Could be worse though, could lose on both.

Level day, happy enough, was down €150 at one stage, even though the place market in the national settled at the same time as the win market, but I could of been down more.

Superb night of sport ahead, El Classico and Tiger prowling in The Masters, watching on the computer here before it comes on TV, the course is like watching a feckin' playstation it looks that neat. Still think Tiger overpriced and Mickelson the danger. 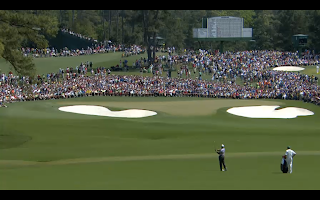