Frustrating enough last two days, the cricket innings SPs have been 1.12 and 1.03, nothing doing there like. Although I did manage to nick €8 off one, boom! Laid 1.12 and backed back at 1.2, was absolutely kicking myself I didnt do the same today.. it went from 1.03 to 1.5, they lost three wickets in the first two overs and then another two shortly after. You know, er, IPL, backing 1.02/1.03, it won in the end, but is it really worth the hassle and the stress? Plus the high chance of redding out when things go like today. 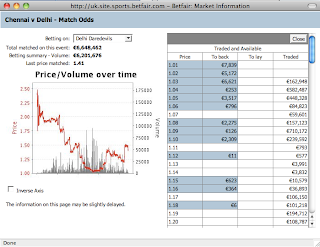 The horses have been the frustrating part. I spent most of yesterday going through results and making custom columns trying to pick which would work best, what price, what amount, back or lay, 'fill or kill' or leave it. I think I have it sorted (sort of), it needs more work. The annoying thing was I've been right more times than I've been wrong but I'm not making the times I'm right pay enough and then getting clobbered the times I'm wrong. Thats just in general, I did lose €75 on one race so I suppose take that out and the rest were OK(ish).

That one race was Emperor Hadrian at Tipperary, I had planned to back, I knew he wanted further so when I saw Johnny bounce out nicely and make the running I backed 2.7, he had the other joint favourite beaten, but when Stacks came to challenge, his head went up awfully and he was having none of it. He actually stopped rather than kept going at the one pace! I'll keep my mouth shut about 'never winning a race' this time (watch it and you'll see what I'm on about), but be interesting what price he goes off at next time out, I'd lay him. Wasnt expecting it at all from him, and its one of the worse I've seen from a Ballydoyle horse, had a few ungenuine ones alright, but he was a real obvious one to everyone today.

Dunno who was backing Full Of Hope at 1/3, looked a certainty on paper though. But ever get that sixth sense saying not to back something? No logic to it at all, just a little voice or feeling in your head saying dont do it, I had that with her this morning at 4/6. Wasnt overly impressed with her either, can only beat whats in front of you I know but theres a way of doing it like, she didnt really win like a 1/3 shot should, but they all count when youve backed them. I'll stick to the plan of not backing in Dundalk this season too.

Happy to see Coordinated Cut (10th of 11) winning yesterday. Elusive Pimpernel (2nd) winning the Craven, Dancing David (4th) finishing second to him. Jaysus, can you picture how good that winner of the RP Trophy is..

Hopefully tomorrow is a bit better anyway, but only minus €38 on the week so far, bit more work to do on Gruss before it starts clicking I think, theres not much other sport on either so I wont go looking for something that isnt there you know.

This ash cloud grounding flights has brought out all the doomsday people again FFS, apparently the world in ending in December 2012, so my advice would be to hold off booking your tickets for Leopardstown at Christmas, pay at the gate.. (What a load of tosh!)

Speaking of that, I was absolutely delighted to read this on irishracing the other day: Irish racing's latest experiment with reduced entry prices proved a big success at Limerick today, where an estimated 4,200 people attended the Students' Raceday.
The decision to reduce entry costs to just €5 per person, combined with a complimentary 'road-map' styled race-card (of light paper), helped draw a large crowd, with racecourse manager Russell Ferris stating “I am delighted with today's crowd which we currently estimate to be 4,200 prople.”

I've been waffling on for months now that its the prices in that has attendances down, not bookmaker prices or racing quality. Leopardstown will have €15/€20 in for their evening meetings soon and the place will be like a ghost town, there'll be an echo talking to each other. Fairyhouses figures were down all three days for the national meeting and at €40 in for Punchestown each day its pretty much odds on they'll be down too. Limerick deserve every bit of success they get.

You know, in the gambling sense of it, would you rather win €5 a hundred times or €450 once off. People always turn up to stuff if the price is right. No good having family race days etc when its €20 in for an adult and €10 in for a child, family of five paying €70 just to get in, they havent done anything yet like have a bet/drink/food. They'll be put off going when the park/beach for the day is free, and if they do go they wont come back as its too expensive.

If I was in charge of Betdaq I'd go 1% commission on all World Cup markets this summer (I say that as someone who doesnt bet on football too), and they'd get plenty over from Betfair with that offer. Whats better like, 5% of a million or 1% of 8 million. There'll be 20 odd million on every game on Betfair, its worth a shot, 5% commission plus chance of 20% premium charge against 1% commission, punters always bang on about value. The football mobs money will spill over into other markets too, Betfair has an awful relationship with its customers, it wouldnt be hard if they advertise it. I want that idea copyrighted if they do it by the way! Lower prices doesnt always mean less money. At least try, the worse that can happen is it doesnt work, not the end of the world (until 2012 anyway). 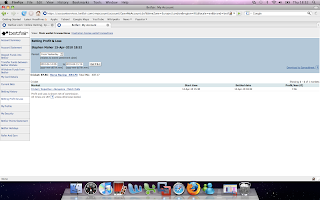