I've lost count of the amount of mug things I've done today, but yet I've won. Theres days I do everything perfect yet lose, no sense to it this gambling lark. Some serious mug moves on the cricket, was a little unlucky with a LBW, clearly wasnt out, I dont mind so much when its close but the ball was actually going down already when it hit him, how the fook is that going on when its outside the line of the stumps already! I took on the bowler, that was in the middle of a 14 run over, seething would be an understatement. Had to dump 2/3s of my position but still ended up with a book like this..

Its IPL, why didnt I go awe-green in the 1.1s? Greed. No other reason for it, mentally saying the games over too was a mistake, then of course things went tits up and I end up with a book like this..

Alright, its still being awe-green, a win and money. But, I could of been €55 green ten minutes before and didnt, was greedy, wanted more, and end up getting less. The annoying thing is, I know all this stuff already but yet I do it again. Havent traded the IPL for a few days, a sharp little reminder not to be so complacent and too sure of things. They cant be trusted like an international team.

Played in running on the horses like a total mug too, nothing else to it, was lucky to escape with just an €8 loss. Boxing was good as there was a few hours in between, that 1.3 at the end of the first fight was criminal, ended up winning though so lost green there. Second fight was much better though so no real loss.

Anyway, everyone feels like theyve done mug stuff at certain times, but at least youre not like this bloke..

I love how he stands there a bit sheepish after he says thinking 'what do I do now' so he says it again. Brilliant. 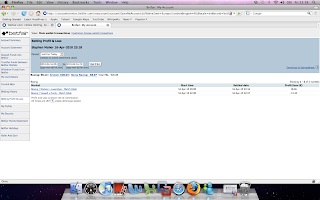