What a hero. Those two sixes at the end were unreal!

Anyway, I've touched on IPL3 being much much harder this year than the past two years, I'm almost 100% certain when Punjab were 1.65 today, they would have been 1.3 - 1.4 the past two years. Before you could get a decent price for 'amazing scenes' and now its sort of expected nearly.

And also Lumpy has cottoned on to that fact too, he had two huge market blockers in place during todays game (screen shots, 200k at 1.42 and 200k at 1.35). Basically theres a hugely slim chance all of his money his matched before he can cancel because its so big. And also people panic and jump in front of him. That being case he can basically put the market wherever he wants given certain events, obviously he cant do terribly stupid things but he can make a 1.4 shot 1.6, a 1.2 shot 1.4 and vice versa, it throws you because you think 'well, thats not the right price' but then he holds it so you dont get a trade (when you should of), then a wicket goes and youre red. Its annoying at times.

Hes a clever enough fooker too, hes rarely wrong. When he is wrong though obviously its fantastic for everyone. Doesnt happen often though.

Another thing I find weird sometimes is the markets view on the rate, I'm of the opinion that it doesnt matter how high the rate is ONCE they are meeting it. Today, rate was over 10, yet they were banging in overs between 11 and 14 from 17 left (3rd over) through 12 before losing a wicket. Market is so low to react to it and then when it does it goes sharply from 1.6 one side to 1.8ish other side in a few balls. Suppose it does sometimes be waiting for a wicket, I dont know, its an odd one.

Glad to pick up the €65 anyway because I lost €80 yesterday. 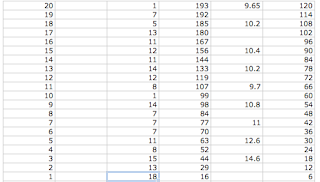