Been struggling on the horses last two days, same as its been all week really, fiddling around with Gruss custom columns but at the same time doing some awful stupid stuff. No excuses, just me being a bellend basically.

Todays win on the cricket is below but yesterday I was hung, drawn and quartered on a "trade" that became a straight bet. I laid 1.2 as a "trade," then two wickets go fairly close together and my "trade" becomes a "bet" because the market goes to 1.03, trading is betting I suppose at the end of the day, still pretty annoyed to be caught like that with something I didnt want to end up with. I had planned to lay after wickets fell waiting for KP, Uthappa and Taylor to bat because I didnt want to support the openers, so I was laying into a mini crisis for the team alright, just have to take it on the chin but I didnt want to be left in that spot you know, it was poor enough.

Been a frustrating week because I've had a couple of near misses and a few 50/50 things I wasnt on the right side of. Boxing and cricket finish just above level because of that, but the horses were the real kick in the stones, I've been awful, no point calling it anything else, nothing else to it.

I have exams on and off for the next three weeks - finishing May 14th (FFS how long like), so I'll fiddle around with Gruss again in three weeks, I was thinking about packing in the "lesser" meetings during the week and just focusing on the meetings that interest me so I'm more on the ball with opinions, you know who wins at Exeter on a Wednesday afternoon is absolutely of no interest to me, but yet I bet in running on it. I was also looking at the Irish only angle too and just forgetting about English racing. I'll come back to it after the exams anyway.

I'll put up the weeks screen shot every Sunday still but bare with me for the next three weeks because it'll be fairly boring, I havent started studying yet so I wont have the time for betting or blogging like I normally do. I'm also well aware I'm a 'thinker' and when I dont give my gambling enough thought I'm terrible, not betting is probably the way to go but theres so much stuff on.. Punchestown, Mayweather fight, Guineas, they couldnt have picked a worse time FFS! I'm taking next year off though after two degrees so I suppose just get it out of the way and be done with it, I'll be happy when its finnish.

And I thought At First Sight, a horse I've banged on about in the past, ran a cracker today finishing second, was only beaten a head too, he had a few setbacks there at the end of last year thats why he never ran after winning but he stayed on really well today when he would of needed the run. I havent lumped on anything today either but Johnnys riding has left a lot to be desired at times, and thats putting it nicely. 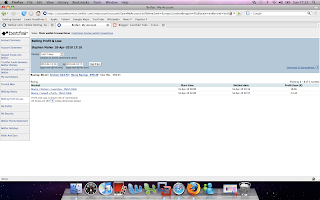