For starters, I'm well aware what date it is and even though I take the piss a lot, I'm NOT messing when I say this - just to make it clear. Ballydoyles 'number one' will come from St Nicholas Abbey, Fencing Master, Beethoven and Viscount Nelson. Its been released to the press anyway so it should be in the paps tomorrow morning. Only my opinion but I'd guess that if St Nic didnt run, Johnny would ride Fencing, but I suppose it depends how they work between now and then. I'd no antepost book at all for the Gunieas, but today I had a tenner on Viscount at 100s. Most likely, hes the only one that will have ran before it, so at least he'll be race fit. Hes always worked nice, just has to do it on the track now.

Obviously everyone knows how much I like St Nic, but I'd be sightly worried about the Gunieas, first run of the season being the main worry. From my point of view though I'm still long on him for the Derby and still think he'll win that easily no matter where he finishes at Newmarket (if he runs). Just the thing about the Gunieas is that, he wouldnt be the certainty that we can all lump on like he was last year. I didnt back him first time out last year either. I still think hes a machine and should win, but just not a mortgage job.

Anyway, steady day today with a profit of €25. Actually really enjoyed this afternoons game, best for a while, not in the profit sense but quality game. Was heavy on both teams at different stages so was happy with equal green because I thought Deccan would win in the end, they didnt. Lumpy took a right caning, he pushed Deccan from 1.8 to 1.6 during a break in the overs, next ball was a dot, next ball was a wicket, KKR were 1.6 then! Was tempted to lay the 1.6 Deccan but was basically too afraid because one big over would have had them in control and the market around 1.2, but if you took on lumpy today it would have been very profitable.

Funny how KKR were 1.6 innings SP, after they posted a record score for IPL (or all 20/20) at Eden Gardens, thought that was massive but waited for the start (learned not to take on Gilly!), Gibbs and Gilly came out smacked it around, suddenly it was 1.8 Deccan after a couple of overs. Takes a brave man not to red out having backed at 1.6 KKR at that moment in time when they were easily hitting 9 an over, then it all falls apart. Hard not to give in to pressure redding out though, very hard. Its a funny game in the sense that you probably back 1.6 thinking "they wont get them" then because of a good start, you panic and red, then eventually end up losing on something you were right with in the first place. 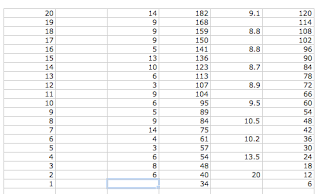 Only negative from today was me agreeing to something that I have no idea what it is, it could be anything FFS. Emma has the week off work, even though we havent lived together for all 6 years, you'd think she'd know by now shes completely invisible to me while theres cricket on. Just when you think you have them trained. She came into the room while Dada was batting (what an innings btw!) and I just said yeah to get rid of her.. the last time something like this happened we were on the phone while a race was on, I zoned out watching it, by the time it was over I heard on the phone "And you dont mind coming with me" .. "Oh yeah, of course," next weekend I found myself at High School Musical the live sing along show with 250 other women and two blokes - who definitely batted for the other side by the way.

Tempted to lay Barney tonight against Taylor but 11.5 is a bit high for the stress of it. Barneys mind is shot to pieces against Taylor though. He'll probably start fast, it'll be 2-2, then Taylor will checkout over 100 and Barney will give up. Has it ever happened before..
Posted by Stephen Maher at 4/01/2010 08:18:00 PM