One step forward, one step back. Won on the first game, lost on the second game. Didnt do anything muggish though, just the breaks gambling. Almighty hangover too, ended up getting locked last night after the match because one of the lads lost his job yesterday, bad times. In the cricket, I'm probably improving in the sense that my losing markets are getting smaller, I think Gruss level profit button has a huge amount to do with that. Likewise though, I'm probably greening up sometimes when I'd have let it run a little bit longer beforehand, it depends on the market really. The one thing I've noticed about this years IPL is that the market is ten times harder than before because it expects 'amazing scenes' now more often that not, 1.3 now was 1.1 last year and the year before it was probably 1.02, since the first three games its really sharpened up not to go too low.

Even today, innings SP was 1.29 to chase 189, three wickets go down early and the market settles at 1.1, you'd think it'd go lower. But obviously from my point of view I'm not backing 1.1 in the IPL! Suppose many people are thinking the same thing. Even knowing this, I still made an error not greening out in the first game while it was in the 1.0x's thinking it should be lower, a mini collapse and I was panic greening at 1.2 now instead. My old friend Mr Raina took them home, amazing scenes FFS, he must of brought a full set of testicles on ebay over the weekend or something. I thought the 1.2 was a fair enough lay at the time, then we had a no ball 6 and it was back to 1.03 or whatever.

Second game, I laid 1.06 supporting THE BEAST (Yusuf Pathan) to get the market moving, he often does more times than not, just when hes going for 4 or 6 every ball, theres a fair chance of him getting out you know. From excel though, I was doing the right thing, the two overs when he came in went for 15 and then 11, then he got out and it was GSM, but if he comes off the market is at 1.3+ in no time at all, just didnt come off today. Hes a fantastic man when the market is low because people are so scared of him, and maybe when its 1.6ish etc when he comes in, its not as good.

Tie up yesterday too, Mumbai went out to 2.8 before coming back and winning, if I held position I would have won, but sure I could of had a bigger red at the same time. Its got much harder to trust players, compared to when they play internationally anyway.

And given what Jose said last night, given up laying the away team record, only lasted two games for me, but he doesnt seem to care though. He was probably just taking the piss, but I still think he wants to come back to England, apparently he has a clause in his contract saying he can leave whenever he likes, with no notice or reason. 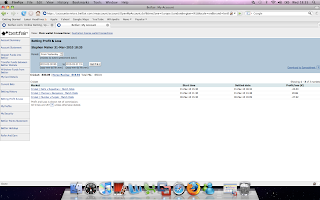