What a feckin' frustrating start to the week! Everything I've done today has found a way of going tits up, I wouldnt mind but every move I've made I've sat here and went "Ah, I'd be unlucky if this happened" .. then BAM, it happened.

Pokanoket in the 2-10 at Market Rasen was probably the shrewdest ride I've seen in ages, he went off around 15L in front, market comes down to 4.4 so I'm happy to lay, he lets the field catch up (went down to 22 then in running, he looked finnish) before kicking on again. I've no gripe losing because its just one of those moments where you go FFS how'd that happen me. Theres an argument for going awe-green I know, but thats never been my style in running, and it never will, thats just me. Couldnt believe he won though jesus, good luck to him.

It really was a day like, ah here have I walked under a ladder or something. The same thing happened Laureldean River in the 3-10, and he drifted sideways all the way over to the stands rail from the far rail.. and still won. Went from 1.1 to 8 before getting back up. I laid him, head in hands man.

Then abandoned the horses and went onto the cricket, I havent had a single chance to 'green up' in anything I've done. I find myself €29 awe-red, which is a proper good result in the circumstances. Lumpy held the market up at 1.4 (innings SP was 1.49) when they were 40-0 after 5 chasing 163, Sachin was there, had to back it, then he gets out (bugger!). And then the others just keep giving away their wicket when they look to be cruising. Games still going on but not calling it right so given up, I'd be happy if Mumbai lose now because it'll mean I've saved money redding out.

Horses ended up -€19.92, I'll update the total tomorrow when the crickets over, hopefully United do the business tonight off out to watch it, I'd take a score draw if given it.

Just for anyone who backed Famous Sunday, she hasnt eaten since she ran, and wasnt a well horse this morning. Probably a reason for her poor enough run, but cant really call her names for losing you know, she obviously wasnt right and hopefully she gets better, it'll be a good while before shes galloping again I think, depends how quickly she recovers you know.

And I'm told Go Native wont run again this season, came back from Cheltenham with sore legs and hasnt trained since. That jump at the 2nd Paul was talking about did all the damage.

If all that wasnt bad enough, just found out they'll cancelled 24, my favourite TV show, and the fooking snow came back this morning! Hard enough get the horses fit, global warming my arse.

Should be around minus €50 for the day, it could of been a lot worse. 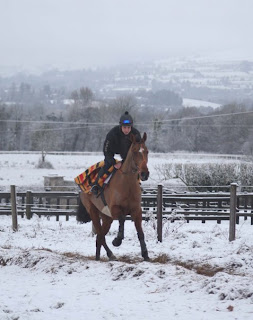