Small losing day today but a winning day yesterday to help things along, have to say having Ruby Walsh commenting in running on RTE is fantastic you know, just great to get his opinion of how a race is going compared to your own, I tend not to really listen to the normal comms but obviously a man of esteem like Ruby you know, you'd listen to him. I havent been investing money on what hes saying but its nice to see his angle to things.

Was very lucky on the cricket yesterday, supported Uthappa as I've been doing throughout and he got the market from the 1.2s to the 1.8s, got rid of the red at the end of an a over and then next over two wickets in two balls has the market back to the 1.1s, jammy getting out, had €300+ of green on Bangalore I could do nothing with but sure no complaints, couple of seconds later and it was goodnight. Chennai v Deccan today, stayed away on purpose because theyve been (in my opinion) the two most untrustworthy sides batting, I think Deccan were in the 1.3s range to chase 140ish, gubbed, that was after Chennai made a balls of their innings, a match of who could fook up the least! Bollinger has done wonders since hes arrived though, really changed Chennais bowling, I'd almost go as far to say that they wouldnt have even got into the semis if he wasnt there.

Delighted with Nobel Princes run today, hes one of my favourites, but he did look a bridle merchant, I reckon he is one now (Harchibald colours too!), had my doubts but today confirmed. And tomorrow will be the first time this season I'm not backing Dunguib when he runs, you know I mean he couldnt win in novice company at Cheltenham and rocks up here against proven Grade 1 winners, I wouldnt be doing it if I owned him but sure I dont. You only have to look at Sizing Europe at the start of the week to see how hard it is for a novice taking on the older horses. We'll see anyway, because Hurricane Fly hasnt ran since last year, Punjabis been disappointing this season and Solwhit, well like, if Charles Byrnes told me today was Thursday I'd still want to check the feckin' calender. 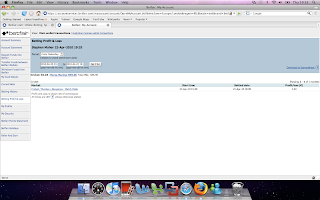