Markets at 1.04/1.05 but theres a couple of reasons why it might be a good lay, even taking on board the score is massive.

- Morkel has batted half the innings and is nackered, hes an important bowler.
- Waston opens for Raj.
- THE BEAST plays for Raj.
- The pitch is a road.
- The boundaries are short enough.
- The heat is immense so the ball is pinging through the air.
- Chennai arent the most fantastic bowlers.
- Chennai posted 188 at Centurion and failed to defend it against KKR.

Alright you know, the score it bleedin' massive, fairly unlikely Raj win, but theres very little places the price can go unless they fall in the heap and it goes straight to 1.01, theres a bit of scope for it to sneak out a bit. 500K at 1.04 and 400k at 1.05 has been traded so if Raj start well the market might panic. Absolutely NEED Watson and The Beast to play well though.

Hoping for around 1.2ish maybe with a good start, its likely a wicket goes early whacking it, but basically the way it is, the worse that can happen is I lose 3 ticks to 1.01 and theres still a whole innings to bat, unless they fall in a total heap.

Miss read the tactics here not choosing to open with Watson, still 14 off the first Morkel over, hes goosed. These are all free runs until Watson or The Beast come out. Hopefully they dont piss about and let the chase go to impossible though..

The Beast comes in hits 4 off the first ball. Cant believe how hes just got out FFS, went for a 6, your man catches it on the ropes, falls over the rope but throws it back in the air and comes back in to catch it. FFS like! A 6 there and the market was moving so much..

GSM Chennai. Raj finished on 223/5. Amazing to think, if Pathan stayed in they would have chased that. Morkel went for 56 runs off his 4 overs. Watson got 60 off 25 balls. Imagine what The Beast would have done, I'm 100% sure Raj would have won. Bollingers bowling has been class though, wouldnt take him on in the future, and hes the one who caught Pathan on the ropes, still cant believe he threw it back in and still caught it FFS, hes basically won them the game on his own though, he only went for 15 off his 4 overs and took two wickets.

Anyway, a Citi Moment Of Success for greening out.

By the way, just flicked on to Sky Sports News there to hear "Tiger to practice with Couples before returning for the Masters." Hopefully the missus wasnt watching.. 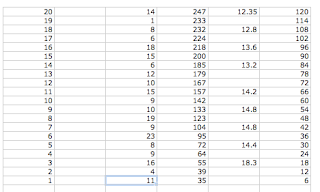