Ruiz = the real Rocky Balboa, how he managed to stand up taking all those shots I'll never know. Awkward fight to trade because Haye would land a heavy shot, go 1.14 then Ruiz would be bounce back so it'd drift to 1.22, plus Ruiz always had a punchers chance you know. No money in the undercard fights either.

Crickets below, lost €11 on the second game though. Fiddling around, I'd no opinion, should of just left it but decided small stakes.

And lost €3 on the boat race.. theres the degenerate addicted gambler coming out. Oxford looked to be closing and the others were 1.03, then they kicked on again and it was all over - SEETHING. It was 33/1 one of them to sink, if I had of known earlier I would of went over with a screwdriver, could you picture the Pakistan cricket team in a boat 33/1 to sink.. 1.01 before you could even see the screwdriver!

I've been gambling since 11 this morning until 12 tonight, nackered, I tell ya something though, I wouldnt have it any other way, I think I deserve a drink even so.. 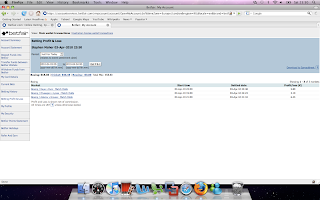